A money bag
Prior to the 7.4 update, Modern Day - Day 39 was the 39th day of Modern Day. It is a Save Our Seeds level, where the player must protect three endangered Moonflowers. Additionally, the Sunday Edition Zombie makes his first appearance in this level. He is an upgraded and more dangerous version of the Newspaper Zombie. Upon completing the level, the player receives a Modern Day Piñata.

Shadow plants could be of use here, as Moonflowers are the endangered plants. Specifically, Dusk Lobber should be used to deal massive damage to crowds. In addition, the Sunday Edition Zombie is introduced in this level, an upgraded version of the Newspaper Zombie. This zombie is incredibly dangerous, as it can take significantly more damage than a normal Newspaper Zombie. While it runs and bites at the same speed, it is still a major threat. There are also several Balloon Zombies to deal with, in addition to some other powerful zombies. Graves are also on the lawn, so Grave Buster is a good option to bring. The most annoying part of this level is the Gargantuar rush at the end. They are in the same rows as the endangered Moonflowers. The player should have no trouble defeating the Gargantuars themselves in the end, but since the Moonflowers are right on the third column, the thrown Imps will land right on them. Infi-nut is highly suggested to help prevent the Moonflowers from being eaten by the Imps. Escape Root can be used to transfer the endangered Moonflowers to a safer spot, but only if the player has it. Ice plants are of the best plants to use, as they can slow down threatening zombies such as the Sunday Edition Zombie.

By Xadda Xadda (Aww... I just used some Power Zaps...)
Add a photo to this gallery 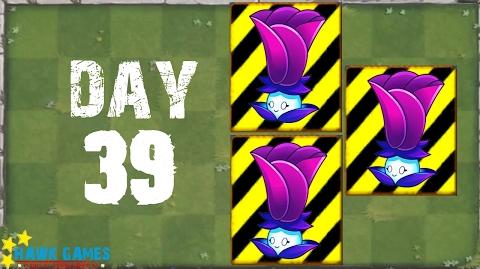 Retrieved from "https://plantsvszombies.fandom.com/wiki/Modern_Day_-_Day_39?oldid=2350169"
Community content is available under CC-BY-SA unless otherwise noted.