Don't let the zombies trample the flowers
Prior to the 7.4 update, Modern Day - Day 38 was the 38th day of Modern Day. The player must prevent the zombies from trampling the flowers. Upon completing the level, the player receives a money bag.

The flowers are on the first column, which may seem harmless, but is constantly in danger of being stepped on. Many Prospector Zombies come in during the flags to fly backwards to cross the flowers. In addition, there are Pterodactyls ready to get some tough zombies like Jurassic Fossilhead to the back. Finally, there are All-Star Zombies and a supply of Super-Fan Imps to ruin deep defenses and potentially cross the flowers. Ice plants are highly recommended to use. In addition, Blover can counter Prospectors, flying Super-Fan Imps, and Balloon Zombies.

Done by GalacticFNAFRunner. Celery Stalker is vital in this strategy. 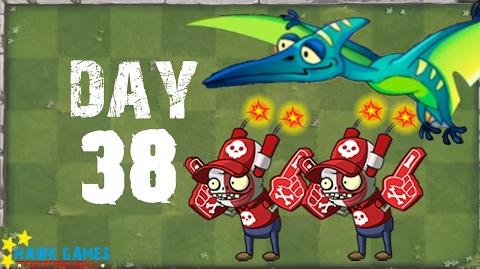 Retrieved from "https://plantsvszombies.fandom.com/wiki/Modern_Day_-_Day_38?oldid=2350167"
Community content is available under CC-BY-SA unless otherwise noted.