Same as before
Prior to the 7.4 update, Modern Day - Day 37 was the 37th day of Modern Day. It is a Last Stand level, where the player starts with 1700 sun and two Plant Food. Additionally, the Brickhead Zombie makes its first appearance in this level. Upon completing the level, the player receives a money bag.

While 1700 sun may seem like a very small number to defeat the tough new Brickhead Zombies that are the only threat in this level, it is actually all that is needed. Because there are no other zombies except Brickhead Zombie (and potentially Knight Zombie who is slightly weaker and has a weakness, which is Magnet-shroom), who acts like a Basic Zombie but is much tougher, there are many gimmicky strategies that can be done.

This level is very simple because it contains no special zombies. Simply take Garlic and Imitater, then Electric Currant, Sap-fling, and regular Wall-nut. Place 3 Sap-flings in the middle 3 rows, and place 3 Wall-nuts in front of them. Then place 3 columns of Electric Currants in front of the Wall-nuts, and use both Plant Foods on 2 rows of Electric Currants. Place Garlic in the top and bottom rows, and shovel them up when they are in low health to regain sun. No Power Ups or extra Plant Food are needed. Good luck!

This strategy can be done without using any Power-Ups and without losing any lawn mowers.

This strategy can generate a victory without Power-Ups nor lawn mowers.

(Independently developed, but not claiming it as a separate strategy, as it is so similar to Strategy 3)

This strategy can be done without using any Power-Ups, premiums, gemiums, and without losing any lawn mowers.

The Knight Zombie showing up in this level (by Yuanyc06) 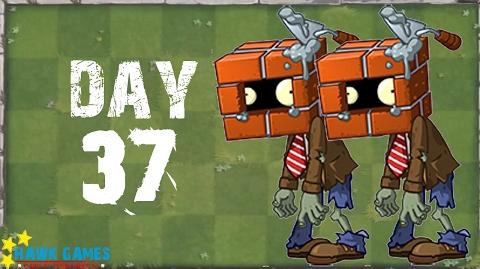 Retrieved from "https://plantsvszombies.fandom.com/wiki/Modern_Day_-_Day_37?oldid=2272468"
Community content is available under CC-BY-SA unless otherwise noted.