Same as before
Prior to the 7.4 update, Modern Day - Day 35 was the 35th day of Modern Day. The player is introduced to the Rally Zombie, the upgrade of Flag Zombie, which has greater health and speed, and will lead an even greater wave of zombies. Upon completing the level, the player receives a money bag.

While the zombies spawned are in relatively small amounts, the zombie variety and the amount of portals spawned makes the difficulty in this level. Prepare defenses quickly and add extra coverage on lanes with portals in them, especially ones that go deeper into defenses. In addition, the Rally Zombie is introduced in this level, which is a faster variant of the Flag Zombie. He should not be of any trouble as long as a proper defense is set up. 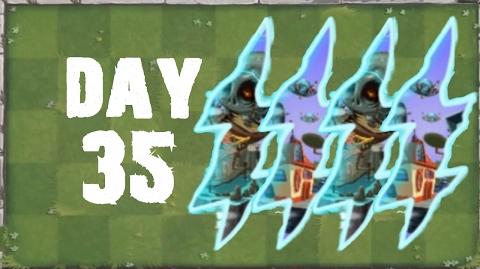 Retrieved from "https://plantsvszombies.fandom.com/wiki/Modern_Day_-_Day_35?oldid=2350164"
Community content is available under CC-BY-SA unless otherwise noted.