A taco with a waffle in it

Modern Day - Day 34 is the thirty-fourth level of Modern Day in Plants vs. Zombies 2. This level is divided into four boss fights, where one Zombot is chosen randomly. The player will then face the chosen Zombot, using most plants from the next world, with Hot Potato, Fire Peashooter, and Cactus being exceptions. The Zombots that the player may battle are the Zombot Tuskmaster 10,000 BC, Zombot Aerostatic Gondola, Zombot Multi-stage Masher, and the Zombot Dinotronic Mechasaur. When this level is finished for the first time, the player is rewarded with a taco with a waffle in it from Dr. Zomboss, its purpose is to serve as a substitute to the taco Crazy Dave has eaten “long ago” and Dr. Zomboss states that "it is gone, gone forever".

Dr. Zomboss: If you will not listen, then you will be destroyed!
Crazy Dave: You have no credibility! TACOOOO!!!

The difficulty will differ depending on what Zombot the player confronts.

Replace the Endurians when they are at their final stage. Stall the boss with Stallias . Use your Hot Potatoes to melt ice blocks, NOT the Zombot Tuskmaster's ice shield, as this summons zombies. Instead wait for them to be destroyed by your Red Stingers and A.K.E.Es. Also, you do not get any Plant Food, so it's slightly harder than other boss battles.

Reward screen of the first time reward, Taco With a Waffle In It

By Dung Dinh Anh. Nightshade's Plant Food effect deals a lot of damage to the Zombot.

By Wynaut821, note the Hunter Zombie in the corner

By Obi Wan Minobi (with an achievement)

What happened to those Impunks?
Add a photo to this gallery 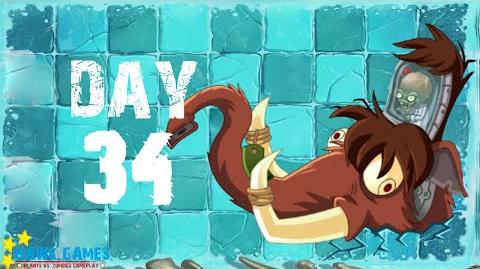 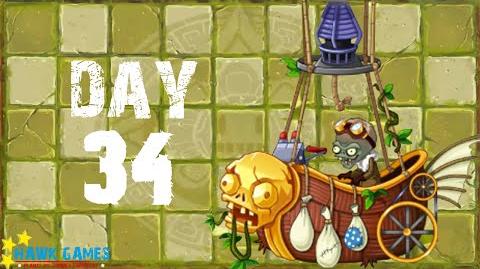 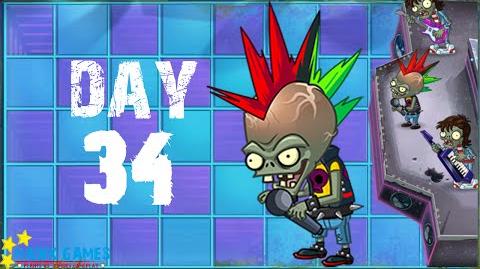 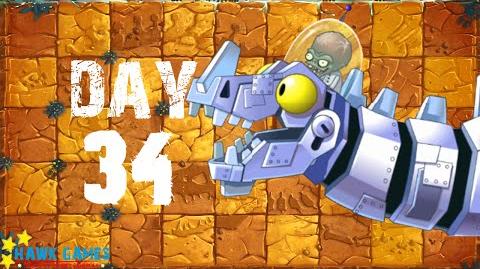 Retrieved from "https://plantsvszombies.fandom.com/wiki/Modern_Day_-_Day_34?oldid=2163736"
Community content is available under CC-BY-SA unless otherwise noted.