X and ＋ (via conveyor belt; Far Future fight only)

A money bag
Modern Day - Day 33 is the thirty-third level of Modern Day in Plants vs. Zombies 2. Just like the previous level, this level is divided into three random boss fights, where one Zombot is selected randomly for the player to battle. The Zombots that the player may encounter on this level are the Zombot Tomorrow-tron, Zombot Dark Dragon, and the Zombot Sharktronic Sub. When this level is finished for the first time, the player gets a Modern Day Piñata.

Dr. Zomboss: I beseech you, time-zippers, you must listen to reason!
Dr. Zomboss: Coherence crumbles! Our eras become nonsensical!
Dr. Zomboss: Stuff is all jiggy and super whacked-out, like!
Crazy Dave: RELEASE THE SQUIRBOS!

Dr. Zomboss: I am telling the truth, Insane Dave Person!
Dr. Zomboss: My words are utterly not an attempt to trick you!
Dr. Zomboss: You cannot re-eat a taco! It is impossible!
Crazy Dave: Imp-possible? I HATE IMPS! WITH A PASSION!

This level should be passed easily if you use this formation.

Use your Plant Food on the Rotobagas that are currently hitting the boss. Make sure your timing is right, so that the boss will not disappear. Doing this will take huge chunks out of its health. 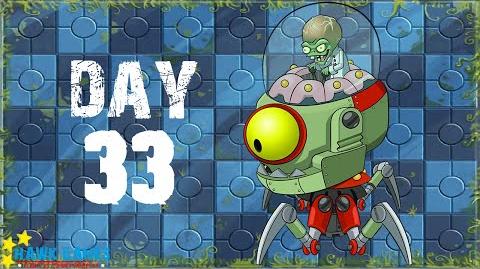 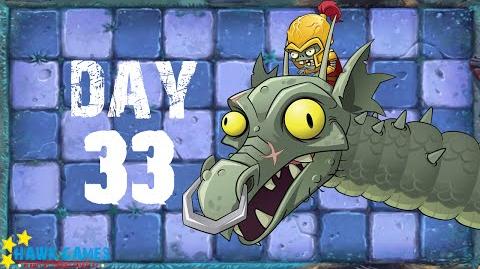 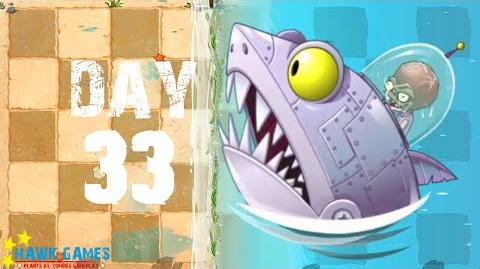 Retrieved from "https://plantsvszombies.fandom.com/wiki/Modern_Day_-_Day_33?oldid=2163733"
Community content is available under CC-BY-SA unless otherwise noted.