One (covers the entire fifth column)

Don't let the zombies trample the flowers
Modern Day - Day 30 is the thirtieth level of Modern Day in Plants vs. Zombies 2. It requires players to prevent the zombies from trampling the flowers, which are in the sixth column, positioned in the middle. Minecart and rail are present on the lawn as well, which is placed beside the flowers (on the fifth column). When this level is finished for the first time, the player receives a money bag.

With the position of the flowers being quite close to the lawn, Newspaper Zombie and All-Star Zombie with their fast speed, Wild West Gargantuar and Gargantuar Pirate which can easily destroy the player's defenses, including Prospector Zombies trampling the flowers from the end of the lawn if not countered properly. With all of them combined plus the objective, it will make the level very difficult. However, the player can place Primal Wall-nuts, Spikeweeds, Infi-nuts or Spikerocks over the flowers, which will not count as being trampled if they walk over either of the latter.

Primal Wall-nut is recommended for this level because of the Gargantuars, All-Star Zombies and its fast recharge.

At first, a Super-Fan Imp will appear which must be killed quickly, so do not let the following Balloon Zombies bother you as much, as they do not trample flowers whilst airborne. Start planting defensive plants on or in front of the flowers such as Chard Guards, or more essentially Primal Wall-nuts, as All-Stars will appear constantly, causing the player to lose the level quickly because of their fast speed.

Blover is also recommended because it can clear out Balloon Zombies, Imps, and even Prospector Zombies.

If boosts are used, it is recommended to use them on the Infi-nut, as its force field will be able to block Balloon Zombies, All-Stars Zombies and Super-Fan Imps.

Note: Blover can be use to blow away Balloon Zombie, Prospector Zombie and Imp from Gargantuar.
Hope you success with my strategy!

By LegendofNickson (no offensive plants, just instant-kills only to deal with zombies)

By Creepes
Add a photo to this gallery 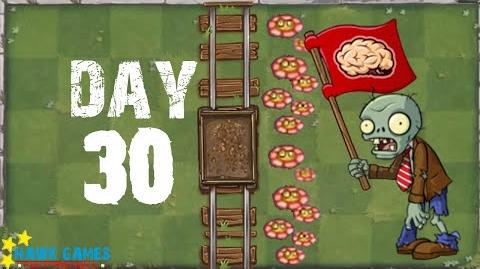 Retrieved from "https://plantsvszombies.fandom.com/wiki/Modern_Day_-_Day_30?oldid=2328720"
Community content is available under CC-BY-SA unless otherwise noted.