Modern Day - Day 29 is the twenty-ninth level of Modern Day in Plants vs. Zombies 2. A Raptor appears in this level. When this level is finished for the first time, the player receives a Modern Day Piñata.

The combination of early waves and different zombies in this level can limit the player into choosing specific plants to deal with them. The player has only one wave to try to build up their defenses due to Imp Dragon Zombies and Super-Fan Imps triggering the first huge wave of zombies, which includes an MC Zom-B and a Breakdancer Zombie. Imp Dragon Zombies are immune to fire-based plants such as Snapdragon or Cherry Bomb, so it is advised not to bring them. This level contains three enemies that kick zombies: the Raptor, Breakdancer Zombie and All-Star Zombie. Just like the previous levels, the combo of All-Star Zombie and Super-Fan Imp poses the biggest threat to the player's defenses. A Raptor that appears in this level will kick an MC Zom-B and a Mummified Gargantuar in the player's defenses. Immediate action should be taken. Tombstones are also present in this level, along with Tomb Raiser Zombies, so it is recommended to bring Grave Buster to clear out the tombstones. The player may need Blover, stalling plants, or strong plants to deal with Balloon Zombies and kicked zombies. Newspaper Zombies when angry can tear down the player's defenses if not killed quickly enough, or an instant-kill plant is not used on him.

Stall every zombie with Stallia and Spring Bean to make them clumped enough to be blown up by either Cherry Bomb or Primal Potato Mine. Use Grave Busters to make space and Blover to clear out airborne zombies both Balloon Zombie and kicked either by the Breakdancer Zombie or Raptor (Raptor is more preferable). Use Plant Food on Spring Bean along with Blover if necessary. If used right, this strategy should give you no lawnmowers or power ups lost. Not even a single Plant Food if possible.

Created by Greyangel the lord

Plant a row of Moonflowers in the second column, then put the Dusk Lobbers behind them, put the Grimroses in front, and in front of the Grimroses put the Primal Wall-nuts, use Intensive Carrot to reuse Hypno-shrooms, use Enchant-mint and Hypno-shroom when needed, and use Hurrikale to kill all balloon zombies in lane. 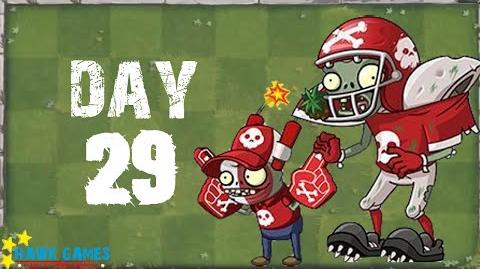 Retrieved from "https://plantsvszombies.fandom.com/wiki/Modern_Day_-_Day_29?oldid=2350158"
Community content is available under CC-BY-SA unless otherwise noted.