Four (Two up and two down)

A money bag
Modern Day - Day 25 is the twenty-fifth level of Modern Day in Plants vs. Zombies 2. It is a Special Delivery level and Modern Day sliders are introduced in this level. When this level is finished for the first time, the player receives a Modern Day Piñata.

The main gimmick in this level is that after the player starts the level, all the plants on the lawn are instantly incinerated, and the player must revive them using the Intensive Carrots that they receive via the conveyor-belt. This is the only plant given to the player throughout the entire level.

This level relies on reviving plants. The most dangerous zombies are the ones who move plants, which are the Excavator Zombie and the Punk Zombie. If Punk Zombie pushes a plant into a space where a very important plant is placed, the player cannot revive that important plant anymore. Excavator Zombie is an even bigger threat as the plants given cannot kill him quickly, as well as bringing plants backward, rendering them almost useless. In addition, Coconut Cannon can only kill him with splash damage. All-Star Zombie is possibly the hardest to deal with, as he can instantly kill plants, comes out quickly, and spawns in a row where there are slider tiles, so the player should kill them quickly, though they can also revive that plant.

Completed by Aleksio567
Add a photo to this gallery 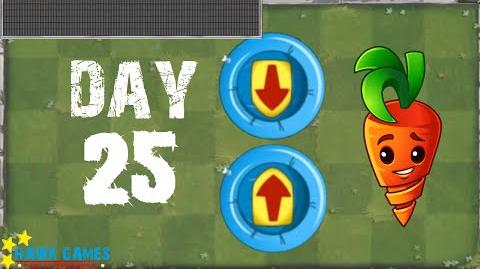 Retrieved from "https://plantsvszombies.fandom.com/wiki/Modern_Day_-_Day_25?oldid=2356806"
Community content is available under CC-BY-SA unless otherwise noted.