Same as before
Modern Day - Day 21 is the twenty-first level of Modern Day in Plants vs. Zombies 2. In this level, All-Star Zombie is introduced and it includes portals from Ancient Egypt, Big Wave Beach, and Neon Mixtape Tour. After completing this level, the player receives a money bag.

The All-Star Zombie is a dangerous zombie, as he charges through the player's lawn at a flighty speed. If he manages to touch any of the player's plants, he can tackle and possibly kill them with the equivalent damage of a Gargantuar's smash. He later slows down at stiff speed after tackling a plant. He also has dense health, meaning that he can be considerably hard to kill, and can act as a defensive shield to zombies behind him.

The portals in this level also pose a threat to the player's defenses. Neon Mixtape Tour portals can spawn the MC Zom-B and Breakdancer Zombie. MC Zom-B immediately kills non-defensive plants around himself, while Breakdancer Zombie kicks dangerous zombies in front of the player's plants. Ancient Egypt and Big Wave Beach portals also spawn and can have dangerous zombies such as the Pharaoh Zombie, Octo Zombie, and Surfer Zombie.

These portals, along with All-Star Zombies, Balloon Zombies, and Newspaper Zombies can take down or bypass the player's defenses if the player does not kill or stall these zombies quickly.

Start by planting a Moonflower in the first or second row of the second column. Keep planting Moonflowers in this column, and plant some in the third column when you're ready. Ignore the first zombie that appears.

When the two Conehead Zombies appear, kill the first zombie (the one you originally ignored) with a Lava Guava. Then place a Dusk Lobber in the second row of the first column. Start placing Primal Wall-nuts on the fifth column, and continue placing Moonflowers and Dusk Lobbers.

Final wave of zombies including one portal from Big Wave Beach 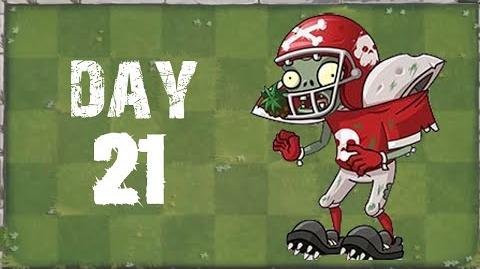 Retrieved from "https://plantsvszombies.fandom.com/wiki/Modern_Day_-_Day_21?oldid=2334191"
Community content is available under CC-BY-SA unless otherwise noted.