Same as before
Modern Day - Day 2 is the second level of Modern Day in Plants vs. Zombies 2. This level contains portals and the appearance of some Ancient Egypt zombies. After completing this level, the player receives a money bag. This is the first level to feature zombies from another world without portals, as another gimmick in Modern Day.

This level introduces the second gimmick of Modern Day, zombies from different worlds appearing in levels not via portal. The zombies in this level, however, are only some Ancient Egypt zombies, and in small quantities too. This includes the Gargantuar. However, where this level becomes a bit difficult is the portals, which are all Big Wave Beach portals. The zombies that spawn from them can cause huge havoc on the lawn. Surfer Zombies can instantly kill a plant once spawned, assuming a plant is in front of a portal, and Octo Zombie can bind up plants easily, with its good amount of health and position of where he spawns.

Plant Moonflower on the second and third column. Primal Potato Mine for the first few zombies while planting Fume-shroom in the first, fourth and fifth column. Primal Wall-nut and Chard Guard for defence. Cherry Bomb for emergencies. No need for Plant Food.

Use Potato Mine on the first zombie

Use Fume-shroom only if needed.

If you have extra sun at the end, use Plants like torchwood and repeater for burning out the Gargantuar, use plant food on it if possible. 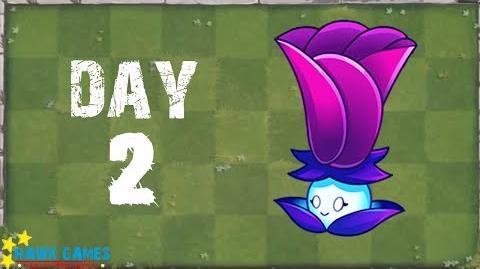 Retrieved from "https://plantsvszombies.fandom.com/wiki/Modern_Day_-_Day_2?oldid=2353750"
Community content is available under CC-BY-SA unless otherwise noted.