Same as before
Modern Day - Day 19 is the nineteenth level of Modern Day in Plants vs. Zombies 2. It is a Special Delivery level which showcases the premium plant released alongside Modern Day Part 2, Escape Root. When this level is finished for the first time, the player receives a money bag.

This level introduces Escape Root, a plant which should be used strategically. Remember that there is only one Coconut Cannon given in this level, so the player should move them around with Escape Root. Also, beware of the Newspaper Zombie, as he can tear down the player's defenses in a second once he loses his newspaper. Balloon Zombie is also a big threat, especially the one that appears early on. Focus using the plants given on tough zombies or Balloon Zombie. The Gargantuar Prime that appears in the last wave can be troublesome, with its lasers that can easily take out important plants. The Bug Bot Imp launched can pose a bigger threat, as the plants given attack very slowly.

1. Just plant Laser Beans in rows that have Basic Zombies


2. When Balloon Zombie comes, plant at least 2 Primal Peashooter on the row he is, to push him back


3.Plant Laser Bean and Primal Peashooter, on the row where Buckethead Zombie is


4.When the Newspaper Zombie Newspaper is destroyed, plant a Coconut Cannon on the lane she is


5.Use the Escape Root to move the Coconut Cannon to row 3, only use it when the Octo Zombie comes out of the Big Wave Beach Portal

5. Plant several Primal Peashooter on row 3 to push back Gargantuar Prime, and place an Escape Root near him so that he can be damaged by the explosion or use any Plant Food on Laser Bean to destroy him. 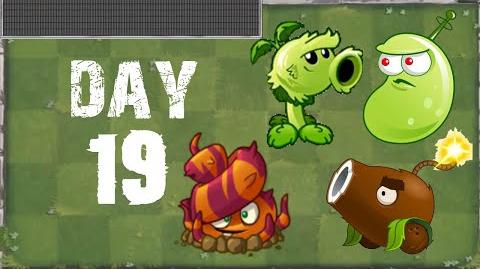 Retrieved from "https://plantsvszombies.fandom.com/wiki/Modern_Day_-_Day_19?oldid=2350148"
Community content is available under CC-BY-SA unless otherwise noted.