Same as before
Modern Day - Day 18 is the eighteenth level of Modern Day in Plants vs. Zombies 2. When this level is finished for the first time, the player receives a money bag.

Like Day 17, there are not a lot of zombies present. While only containing Surfer Zombie and Zombie Bull as zombies from other worlds, this level should be very easy for the player. For one, no portals spawn. Second of all, the main threat the player faces is the Balloon Zombie, which appears multiple times during the course of the level but can be countered easily using Blover. However, this zombie does not appear very early, so the player has some time to defeat him. In addition, there are four Newspaper Zombies in the level. Finally, Surfer Zombies can be dealt with easily but Zombie Bulls can be a bit problematic. Place plants closer to the right to slow the Zombie Bull quicker.

Plant Moonflowers on second and third columns, Dusk Lobbers on first and fourth columns. Use Primal Potato Mines on the first four zombies. Explode Zombie Bulls with Cherry Bombs. Use Primal Wall-nuts and Chard Guards for defense. Constantly use Blovers to blow away Balloon Zombies. 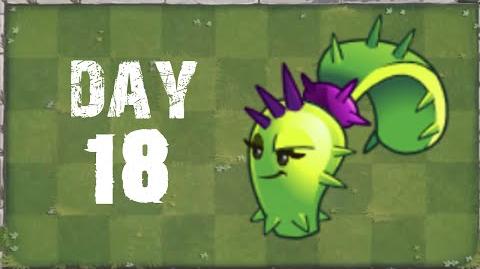 Retrieved from "https://plantsvszombies.fandom.com/wiki/Modern_Day_-_Day_18?oldid=2350147"
Community content is available under CC-BY-SA unless otherwise noted.