A money bag
Modern Day - Day 17 is the seventeenth level of Modern Day in Plants vs. Zombies 2. Dusk Lobber is pre-selected in this level. When this level is finished for the first time, the player unlocks the aforementioned plant.

The player should not have much worries with this level, as the zombie density is extremely low. The player has plenty of time to set up defenses. There are little threats, but the main one being the Arcade Zombie and some Turquoise Skull Zombies at the last wave. Again, the player should have enough firepower to defeat these zombies. The player should utilize Moonflower, as it will make the given plant, Dusk Lobber, better at attacking. Dusk Lobber, when powered, will lob down three lanes instead of one. Only one portal appears during the level, which spawns almost half way into the lawn. The fact that it only appears last wave and is an Ancient Egypt portal only makes it easier to deal with.

Use Primal Potato Mine for first five zombies and then plant Moonflowers in second and third columns. Plant Dusk Lobbers in first and fourth columns. Use Primal Wall-nut and Chard Guard for defense. Use Cherry Bombs and Celery Stalkers to defeat Turquoise Skull Zombies. 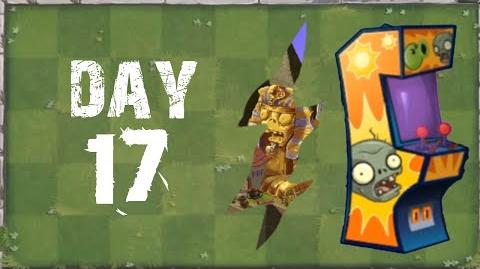 Retrieved from "https://plantsvszombies.fandom.com/wiki/Modern_Day_-_Day_17?oldid=2350145"
Community content is available under CC-BY-SA unless otherwise noted.