Survive a massive attack in the Modern Day

Survive without any lawn mowers
Modern Day - Day 16 is the sixteenth level of Modern Day in Plants vs. Zombies 2. The player is required to battle all of the Gargantuar variants in the game except for the Vase Gargantuar, Dark Ages Gargantuar, Gladiator Gargantuar and Head Office Impgantuar, without lawn mowers. When this level is finished for the first time, the player receives a Modern Day Piñata.

With the level consisting of mostly Gargantuars, the entire level poses a big threat for the player. The first part will contain powerful plants for the player. However, as waves start to progress, powerful plants will be swapped out for weaker plants. As a result, this level heavily relies on the player's positioning and use of given plants, including luck from the plants provided. As there is no Plant Food provided in this level, the player will need some skill in order to pass this level.

This strategy divides the given plants into four categories:

After the first wave by Mognoxprox

By LegendofNickson (prior to 5.2.1 update)

Example of Dynamic Difficulty on this level by BF10 (prior to 6.0.1 update) 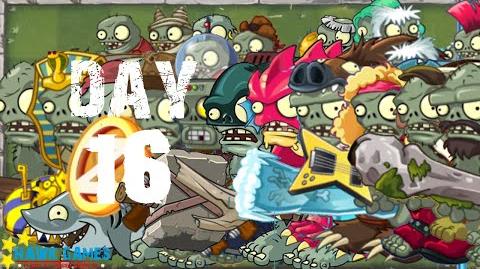 Modern Day Day 16
Add a photo to this gallery

Retrieved from "https://plantsvszombies.fandom.com/wiki/Modern_Day_-_Day_16?oldid=2378413"
Community content is available under CC-BY-SA unless otherwise noted.