A money bag
Modern Day - Day 15 is the fifteenth level of Modern Day in Plants vs. Zombies 2. This is a Save Our Seeds level which requires players to save two endangered Primal Wall-nuts, both located at the fifth column. When this level is finished for the first time, the player receives the Modern Day “note”, which is a taco trap.

Blover is highly recommended, as it can take down every special zombie present in this level. However, the player will have to use the Blover at the right time in order to blow away the airborne zombies.

Now, the plants seem weird together but lets face it. Place Sun-shroom on the fourth column, and also place Primal Wall-nuts and Chard Guards for defense. Then place Split Peas on the second and third column. After that, place a Spring Bean on the third row first column and Cherry Bomb for emergencies. This strategy involves Plant Food which can majorly help you to clear out zombies on the lawn; Use a Plant Food on the Spring Bean and then use Blover.

Yes, this is legit by ShroomstagramUser

By EpicGamer23468. I forgot to take a picture the first time round. 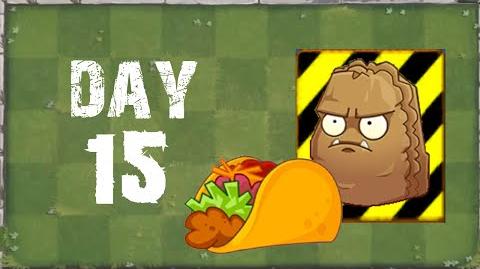 Retrieved from "https://plantsvszombies.fandom.com/wiki/Modern_Day_-_Day_15?oldid=2356975"
Community content is available under CC-BY-SA unless otherwise noted.