The objective is not to lose ten plants, which seems like a lot of plants to lose. However, the player should not take the objective for granted. The combination of Excavator Zombie and Parasol Zombie force the player to use a lobbed shot plant and a projectile-based plant, or an area of effect plant to defeat both. In addition, both zombies come in relatively fast and their speeds themselves are also fast. The player should worry about the dinosaurs that appear too. These can easily bring the aforementioned zombie up close, making the plant lost limit decrease very fast and cause the player to lose very quickly. Not to mention there are Chicken Wrangler Zombies in the first flag which can easily tear their way through defenses. Bringing Lightning Reed can easily counter this. Perfume-shroom is disabled in this level, only making it harder. Do not bring fire attacking plants, as the Imp Dragon Zombie will negate its damage, making plants like Snapdragon useless. Guacodile is a good choice here as even though it counts as losing a plant if it rushes off screen, it can kill an Excavator in one hit if it is directly planted on them. However, they should be carefully used with the Chicken Wrangler Zombies and two Guacodiles are needed to kill a full health Parasol Zombie. Because of the zombies appearing in the level, the player's best bet for offensive plants is the Fume-shroom, as other area of effect plants are either too expensive or get countered by the zombies. However, Fume-shroom will need stalling and defensive plants to aid it. Cold Snapdragon can also be used to have the same power as Snapdragon without worrying about Imp Dragon Zombie, but this is only if the player has it. 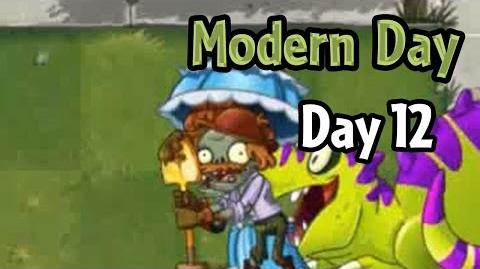 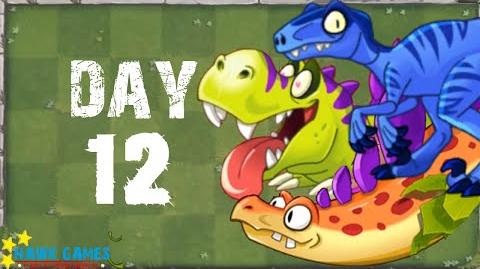 Modern Day Day 12
Add a photo to this gallery

Retrieved from "https://plantsvszombies.fandom.com/wiki/Modern_Day_-_Day_12?oldid=2349657"
Community content is available under CC-BY-SA unless otherwise noted.