Same as before
Modern Day - Day 11 is the eleventh level of Modern Day in Plants vs. Zombies 2. Shadow-shroom and Garlic are pre-selected in this level. When this level is finished for the first time, the player receives a money bag.

This level introduces Shadow-shroom to the player. When eaten, it poisons the zombie that ate it over time. Using Moonflower in conjunction with Shadow-shroom can help wipe out huge hordes, as the poisoned zombie can pass the poison effect onto another zombie (if Shadow-shroom was powered up). In addition, it also hints to the player that Shadow-shroom negates armor, shown by making Newspaper Zombie eat it. Unlike most levels in this world, this level allows for plenty of time to get defenses going, only making this level easier. Overall, this level should not be too difficult for the player, as the special zombies are easy to deal with, but should be killed quickly, as they can cause some ruckus deep in the lawn. Using Garlic is not mandatory, but it can lead for some unique strategies for this level. 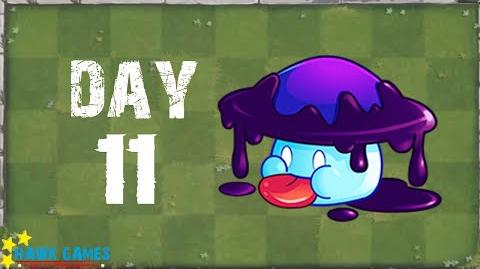 Retrieved from "https://plantsvszombies.fandom.com/wiki/Modern_Day_-_Day_11?oldid=2349656"
Community content is available under CC-BY-SA unless otherwise noted.