A money bag
Modern Day - Day 10 is the tenth level of Modern Day in Plants vs. Zombies 2. This level features mainly Frostbite Caves and Far Future zombies. Power Tiles of two different types are present on the lawn. It is also the last level of Modern Day Part 1 to have portals in it. When this level is finished for the first time, the player unlocks Shadow-shroom.

There is a combination of most of the strongest Gargantuars in this level: Gargantuar Primes which can shoot lasers, Jurassic Gargantuars with high health and Sloth Gargantuars that throws three Imps are in this level. Zombies like Jurassic Imp, Weasel Hoarder, and a lot of zombies appear at the start making the level really challenging. Troglobite, Robo-Cone Zombie and Mecha-Football Zombie are also a really big threat. The player needs to prepare a powerful set of plants to win, as well as a good early strategy. Power Tiles appear in this level, but their position renders them completely useless, most of them appear where the zombies spawn.

Now, strong Gargantuars are present but you have got good plants on your side. Moonflowers on column 2 and then anywhere. Plant Nightshade on any available spot that is powered. Stallia for the first few zombies and for Gargantuars too. Cherry Bomb for emergencies.

Another strategy done by Pmhpc, this time done with premium plants and the eighth seed slot.

Primal Peashooter strategy by SaveTheLawnMower. Use Primal Wall-nuts to let the Snapdragons destroy the Shield Zombies and Troglobite's frozen blocks, or use Cherry Bombs.

The Pult Bros. (By ShroomstagramUser) 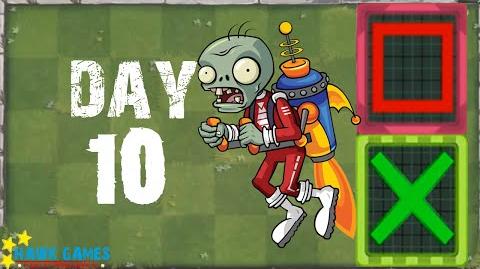 Retrieved from "https://plantsvszombies.fandom.com/wiki/Modern_Day_-_Day_10?oldid=2350146"
Community content is available under CC-BY-SA unless otherwise noted.