A money bag
Modern Day - Day 1 is the first level of Modern Day in Plants vs. Zombies 2. Portals make their first appearance in this level. When this level is finished for the first time, the player unlocks Moonflower.

Dr. Zomboss: Aha! Project Paradox begins...NOW!
Penny: Timeline alert, User Dave!
Penny: We have arrived moments before our departure!
Penny: If my guess is correct, Dr. Zomboss will attempt to prevent your initial taco-consumption!
Penny: Our journey will cease to exist!
Crazy Dave: NOOOOOOOOOO!
Crazy Dave: ...OOOOOOOO! Sorry, I was busy screaming "No." Did you say "taco"?
Penny: We must beware, User Dave. Dr. Zomboss will surely deploy all his time-varied zombies against us!
Crazy Dave: TACOOOOOOO!

The level itself is not too difficult, only consisting of the three zombie variants plus the Flag Zombies, and very few of them too. However, what makes this level escalate in that are the summoned zombies by one of the gimmicks of this world, portals. The zombies spawned appear in specific spots, which are generally in the player's defenses. The player should be aware of what portals spawn, where they spawn, and finally what zombies come out of it. Zombies like Mecha-Football Zombie, Robo-Cone Zombie, Pharaoh Zombie, Barrel Roller Zombie, and Shield Zombie can be devastating to the player.

This strategy can be done directly after you have completed Ancient Egypt - Day 8, but you also must have completed Far Future - Day 1. The point of this strategy is to help you obtain Moonflower early on, which will be used in the rest of my strategies.

When the round starts, focus on planting Primal Sunflowers. Try and get two columns of those. Use Primal Wall-nut to stall the first zombie and then Primal Potato Mine. Do that to the next zombie and then use Primal Peashooter. Try and get one column of those. Then plant another column. When the first portal arrives, use Stallia to stall the first zombie and then Chard Guard. Primal Wall-nut for the Buckethead Zombies. Do the same until final wave. Also, use Cherry Bomb for the tomb-raisers (the zombie who barfs up bones). In the final wave, use Primal Potato Mines to kill the far future zombies. And cherry bomb too. If you do that, you will still have two Plant Foods. No premiums. No 8th seed slot. Brilliant!

Wallnut or its primal variant(W)

Potato Mine Or its primal variant(P)

Plant S first. When the first zombies come, plant P to kill them.

Plant SP. By the time the first portal appears, you sholt have planted at least on of them.

You should be fine.

Use Plant Food in emergencies

You Should be able to complete the level without losing lawn mowers, premium or genium plants

Try planting as many Twin/Primal Sunflowers as possible (1 row is enough) with the aid of Gold Bloom if possible. Use Snapdragons/Cold Snapdragons (plant on the 4th column) to kill the first few zombies, also plant Primal Wall-nuts (on the 5th column) to protect your offence and sun production. You also start planting Primal Peashooters on the 2nd and 3rd column to provide more offence. Once the Ancient Egypt portal arrives at the first flag (spawns on row 3, column 4), it’ll bounce your Snapdragon/Cold Snapdragon if you planted there. Shovel up the bounced Snapdragon/Cold Snapdragon and plant a replacement one where the portal is. The Primal Peashooters will neutralise the Ancient Egypt zombies so do not worry. Use the Primal-Pea-Blover method to get rid of regular lawn zombies and also to deal with the Pirate Seas portal that will spawn next but since it doesn’t spawn too deep into your defences, it’s okay. During the final flag, your defences can deal with Shield Zombie, but when both Robo-cone Zombie and Mecha Football Zombie appear, use E.M. Peach on them. If Shield Zombie is defeated, it is most preferable to use the Primal-Pea-Blover strategy to defeat both the Cone Mech and the Football Mech. Then you succeed! Congratulations!

A salad full of plants you get early on, this is a great strateggy to begin your Modern Day journey. Plant Puff-Shrooms early on while your sun builds up, then plant Primal Peashooters once your sun gathers up. If a Sarcophagus zombie appears, feed it a Chili Bean. This is because Pharaohs get stunned by CHili Beans no matter what. When a Tomb Raiser comes in, freeze it with an Iceberg Lettuce as the first thing it'll do is create more tombstones. While the time-traveling craziness is gathering up, plant Kernel-Pults in the lane the Pirate Seas Portal takes place. It can stun Seagull Zombies and Pirate Captain Zombie, which you can plant a Puff-Shroom infront so the Parrot targets it first, while the Primal Peas push the barrel. The Far Future Portal is the most dangerous one here. Shovel up sunflowers in that lane to make way for more Primal Peas, pushing the robots. You could spend the plant food on Primal Peashooter to knock back two birds with five stones or Kernel-Pult to butter and stall them up. Note that these mechs are immune to Chili Bean, meaning they will just eat the bean.

By LegendofNickson (used all plants from different world)

Testing out the Solar Tomato by EpicGamer23468

A super shocking setup by EpicGamer23468 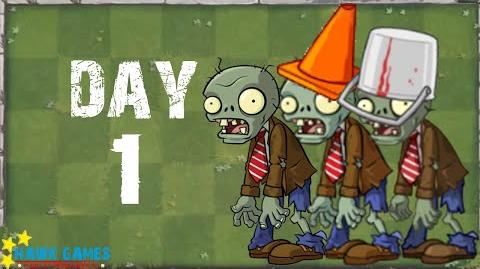 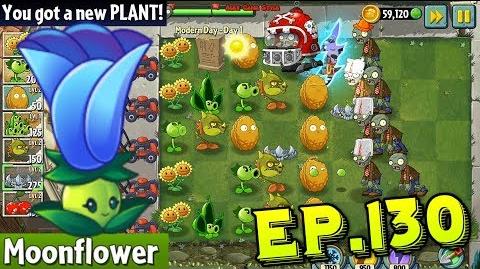 Retrieved from "https://plantsvszombies.fandom.com/wiki/Modern_Day_-_Day_1?oldid=2349642"
Community content is available under CC-BY-SA unless otherwise noted.