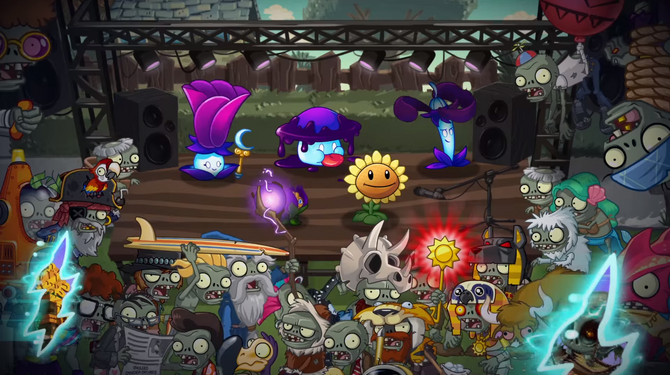 *Unless already encountered in Piñata Party, Boss Vase and/or Vasebreaker Endless, etc. (Boss Vase/Vasebreaker Endless applies only to the Imp)
†Optional and if not counting now-Epic Quest expansion levels of Wild West.

It is set in the present, more precisely a few moments before Crazy Dave eats his taco (and further begin his time travel journey), and features Dr. Zomboss trying to negate and alter history. The lawn is the same as the Player's House and the music is a combination of themes from the first game with instruments from every world.

This world is a mash-up of every time period encountered before, the main environment modifier, portals, reflect that. Portals summon special zombies from any time period to the lawn. The tiles where portals appear and the zombies summoned are scripted and never change. The gimmicks from some other worlds are also present, elevating the challenge to the point of being the second world with a five Jalapeno difficulty rating.

Since the player can encounter zombies from every previous world in this world, it can be a good option to complete multiple tasks at the same time from Travel Log that involves killing certain zombies.

The end is the beginning! Return to moments before you left in a contemporary contest stocked with zombies of every egregious era!

After obtaining the world's key from Big Wave Beach - Day 32, the player gains access to Modern Day. On Day 1, Dr. Zomboss declares the beginning of his Project Paradox. The player also encounters portals that spawns zombies from other eras depending on the portal itself.

On Day 32, Dr. Zomboss informs the player that their attempt to re-eat a taco has shattered time and it is up to him to fix it, which Crazy Dave responds by saying that he is too taco-addled to care. On Day 33, Dr. Zomboss stated that he is not lying and re-eating a taco is impossible. On Day 34, Dr. Zomboss says that if Crazy Dave will not listen to reason, they will all be destroyed. After defeating Dr. Zomboss, he says that Crazy Dave must let go of his dream of re-eating a taco and presents to him the Taco with a Waffle in it. Crazy Dave is shocked and says that this is the best day of his or anyone else's life. Penny responds by saying that maybe they have misjudged Dr. Zomboss this whole time, but then, Dr. Zomboss states that perhaps they may have not misjudged him and he may not be planning anything else for the future. He then flees.

On Day 35, Crazy Dave says that the Taco with a Waffle in it was delicious, but he smells more zombies coming. Penny says that the zombies still want brains. She further says that they would see stronger versions of zombies.

On Day 44, Dr. Zomboss appears and asks Crazy Dave about his taco, which actually contained a secret ingredient, guessing that he will surely appreciate the zombies. After they have defeated the Zombot Tomorrow-tron, Crazy Dave and Penny ensure that they have a high chance of survival, as of powered-up plants, while Dr. Zomboss says that looks like it is required to have more upgraded zombies.

Since the 7.4.1 update, this limited-time Epic Quest of 10 steps was added. It uses Modern Day days 35 to 44 as equivalent of its 10 steps. A money bag is awarded after completing each step, and completing all 10 levels will give the player 100 gems.

It is playable on Days 15, with two endangered Primal Wall-nuts. and 39, with three endangered Moonflowers.

Similar to the first game, the player has to make matches of three or more of the same plant so more can appear. Each match gives one sun plus another one for each chain reaction caused. The sun is used to upgrade the plants on the board. If the player manages to make a match of more than four plants, the Plant Food effect of the plant moved is activated. When a set number of matches is reached, the player wins the level.