Super Rare
Folks, meet the crusher himself, Mr. Mob Cob. Always the snappiest of dressers, Mr. Cob is a simple businessman who's looking to stop the Zombie force from encroaching on his hard-earned territory.
Mob Cob is a Super Rare variant of Kernel Corn in Plants vs. Zombies: Garden Warfare 2. He is shown to have a 1930's gangster theme and have wheat guns as his weapon. His description in the character selection screen states that his shots penetrate zombies, and he does slightly more damage in exchange for a slight decrease in rate of fire. His weapon has 45 ammo. He had been seen in certain parts of developer diaries, especially in the Backyard Battleground. A better glimpse of him was seen in the Multiplayer Beta trailer, and he was also a playable character in the actual beta of the game. He was the only Kernel Corn variant playable in the beta.

His name is a reference to The Mob, which is another name for the American Mafia, while his outfit seems to be based on a Mafia member from the early 20th century. His Corn Crusher cob busters are based off of the Thompson submachine gun, which is closely associated with mobsters.

Folks, meet the crusher himself, Mr. Mob Cob. Always the snappiest of dressers, Mr. Cob is a simple businessman who's looking to stop the Zombie force from encroaching on his hard-earned territory.

Mob Cob's primary weapon is the Corn Crusher, a fully automatic weapon that deals 7-8 base damage and 8-10 critical damage depending on range. It has a slower rate of fire than the standard Cob Busters, but it can shoot through zombies if two are standing in the line of fire.

Mob Cob can be one of the most damaging Corn variants in the game once you are skilled with using him. His primary weapon does lots of damage if you can continue hitting your opponents, and it discourages using teammates as shields due to the piercing effect of his weapon. Use the Husk Hop to get to high vantage points, and then chip away at your opponents- if they fail to take cover, you should be able to vanquish them quickly. If they attempt to get away, use your Butter Barrage and Husk Hop, to try to discourage that. 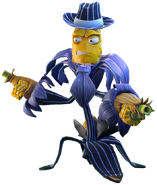 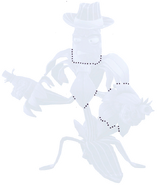 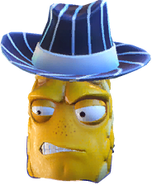 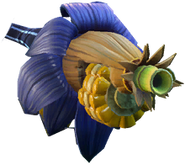 Mob Cob in the customization booth

A close up of Mob Cob