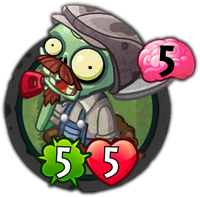 When played: Each Zombie hides in a Gravestone. Mix them up randomly.
Digging graves is hard work, but seeing customers rise out of them makes it all worth it.
Mixed-Up Gravedigger is a premium legendary zombie card in Plants vs. Zombies Heroes and a member of the

. He does not have any traits, and his ability hides all zombies under gravestones, then randomly moves all gravestones around. This ability only activates when he is played normally without in a gravestone.

Digging graves is hard work, but seeing customers rise out of them makes it all worth it.

Mixed-Up Gravedigger is useful in activating the "When played" abilities of many zombies. Another way of using this is in rush decks. Protecting every zombie is key, so using this to protect against most threats is a good option. This strategy can be applied to any deck to try and trick your opponent to not knowing what to do that turn. Using Headstone Carver could also boost all of your zombies if he is revealed first or if you play him after this zombie. He will also be able to protect all zombies against anything that don't target gravestones. However, the stats of all zombies will also be reset, so he can prove anti-synergetic, especially when using stat-boosting cards, although, some strategies do use him as a way to regain initiative in hard matches.

A good strategy is to have a zombie in an aquatic lane, along with strong zombies. This is because he only mixes up the zombies' locations, and will therefore not relocate tombstones when Mixed-Up Gravedigger puts every zombie into gravestones, there is a chance that a strong zombie or Mixed-Up Gravedigger himself ends up in that lane, where it will be free from most things and do massive damage.

Super Brainz and Huge-Gigantacus can use a useful tactic using Mixed-Up Gravedigger with science zombies on field, especially Gadget Scientist (this will only work if Gadget Scientist is revealed last, however), or play him in Medulla Nebula to gain an extra 2

Strikethrough plants and Grave Buster. Impfinity can use this with

Crazy zombies such as Conga Zombie or Foot Soldier Zombie (only if he is revealed on the heights). This can be especially useful with zombies like Jester (in order to reset his health). Neptuna can use this with zombies such as Landscaper and Intergalactic Warlord to destroy plants and boost zombies. Most Brain Freeze decks, on the other hand, do not really benefit from Mixed-Up Gravedigger, as

Beastly zombies are better when their stats aren't reset. However, there are some zombies that can work with this, from Loudmouth to Zombot 1000.

You can also Bounce Mixed-Up Gravedigger via Firefighter or Secret Agent to reactivate his ability.

However, you need to be careful if Spyris is in play, as your opponent can know what zombie is on what lane and find the lane with the most threatening zombie on it. Most

Smarty heroes can use powerful plants to block that lane, while Citron or Beta-Carrotina can destroy that gravestone with Grave Buster. The Cool Bean + Winter Squash combo is also a massive threat, so keep that in mind.

There isn't really a way to counter this zombie, as you do not know which zombies are in which lane. The only good option is to use Grave Buster. However, this is usually ineffective unless there are only a few zombies hiding in their gravestones, because zombies are mixed in random spots and you can only have 4 Grave Busters in a deck. In any other case, just try and play plants against the gravestones and hope for the best.

A great counter to this zombie is Spyris. If you have obtained Spyris in any way like Cornucopia, Plucky Clover, or Seedling, then Spyris can be useful to know what zombie has switched places and can help you keep track of the threatening zombie, including Mixed-Up Gravedigger. You can go further and play Grave Buster on the gravestone that the zombie is hiding in.

Blockbuster is another good counter to this zombie, as her Evolution ability can destroy up to 3 gravestones easily.