If you don't slide Missile Zombie with your fingers, it will cause great damage to your ship.

He is a minister honored by many zombie pilot, conscientious and hardworking in maintaining aerial order. The zombies are talking about giving him a smart brain for his contributions, though that would be out of the picture until he retires.

Missile Zombie (飞弹僵尸; pinyin: fēidàn jiāngshī) is the ninth zombie encountered in Sky City. In the stage, he will randomly appear in the lower right corner of the screen. He cannot be targeted by plants. In order to destroy him, the player must swipe him away with their finger rapidly in a similar fashion to Power Toss. If the player does not act fast enough, he will shoot a missile onto a ground tile and destroy the player's plants on that tile and the surrounding tiles, as well as doing huge damage to their ship.

The Missile Zombie is based on a type of piloted bomb made by the Japanese during WWII, used in the same fashion as a Kamikaze fighter.

Swipe him with your finger as quick as you can. If you are not quick enough, he will destroy one of your ground plants and also do massive damage to your ship. After dealing the first swipe to him, do not let go of your finger immediately, and instead continue swiping on him until he is destroyed, as there can be times where your device may not recognize the swipes given. Similarly to the Transport Boat, he is massive and also a similar color to most zombies that appear in this level, so you may not notice him before it is too late. Due to his massive size, he can also obscure some of the zombies that appear in the lower part of the grid. In addition, he can take up some precious time in levels where you need to set up defenses quickly, but are overwhelmed by these constantly. 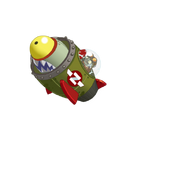 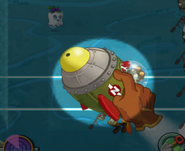 The game's tutorial on how to defeat the Missile Zombie 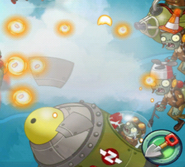 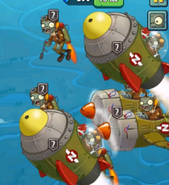 2 Missile Zombies in the seed selection screen (Endless Challenge only) 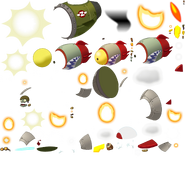 Missile Zombie Sprite
Add a photo to this gallery

Almanac icon
Add a photo to this gallery

Retrieved from "https://plantsvszombies.fandom.com/wiki/Missile_Zombie?oldid=2335561"
Community content is available under CC-BY-SA unless otherwise noted.