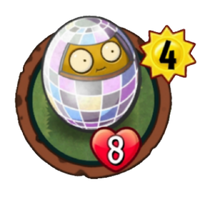 When your Nuts get hurt, do 2 damage to the Zombie Hero.
Dressed up as a mirrorball for a disco-themed party. Never looked back.
Mirror-Nut is a premium super-rare plant card in Plants vs. Zombies Heroes and a member of the

. It has the Team-Up trait, and its ability does 2 damage to the zombie hero every time a nut plant, including it, is hurt. This ability stacks with each Mirror-Nut on the field and persists until all Mirror-Nuts are removed from the field. Its closest zombie counterpart is Jester.

It is based on a disco ball, a spherical object that reflects light directed at it in many directions, producing a complex display; specifically, Mirror-Nut is a Wall-Nut in a disco ball-like costume.

Its name is a portmanteau of the words "mirror," referring to its appearance and ability, and "Wall-Nut," the Plants vs. Zombies plant it is based on.

Dressed up as a mirrorball for a disco-themed party. Never looked back.

Mirror-Nut may be more expensive compared to the other walls in the game, but 8

is still an amazing deal for 4 sun. However, Mirror-Nut's true power comes from not its stats, but its ability, which is perfectly suited for a nut deck. As many nuts lack offensive power (even Pecanolith decks lose power over time), they will struggle to take down tougher zombies and then hit your opponent, but Mirror-Nut's ability bypasses the zombies and hits them directly, saving you a lot of trouble. And given how cheap many nuts are, and how much health they have, Mirror-Nut will dish out lots of direct damage with a good setup, especially if many are on the field at once.

Since your nuts will have to take as many hits as possible, boosting their health with cards like Steel Magnolia and Photosynthesizer is highly recommended. You could also use Smackadamia as it will boost all nuts.

A particularly effective strategy is to use a typical Mirror-Nut setup, then play Galacta-Cactus on a lane where you think it will surely be destroyed; since Galacta-Cactus hurts all your nuts when it is destroyed, you will be able to do heavy damage at once. Even if your opponent tries to play smart by playing as few zombies as possible, they will not be able to ignore Galacta-Cactus due to it having

Bullseye, doing unblockable damage continuously until removed. However, the opponent can choose to target Mirror-Nut first.

There are also cards in other classes that benefit Mirror-Nut greatly. Citron and Beta-Carrotina have access to Planet of the Grapes to reliably draw many cards at once, as well as Bog of Enlightenment and Shrinking Violet to lower the zombies' strength, allowing the nuts to take more hits (unless the zombies reach 0 strength). Wall-Knight can heal his nuts with Aloesaurus, although his classes lack efficient card draw. Grass Knuckles can play Umbrella Leaf to protect the nuts from devastating instant-kills like Rolling Stone, Weed Spray, Evaporate, and Knockout. And finally, Spudow has strength-boosting cards to make his nuts hit harder. While that isn't what a Mirror-Nut setup really needs, it serves as an alternate form of protection against the previously mentioned instant-kills.

Mirror-Nut's biggest weakness is instant-kills, as they do not damage plants and thus will never activate its ability. If your opponent is a

Hearty hero, boosting your nuts' strength with something like Go-Nuts is recommended, as the instant-kills in the Hearty class cannot touch plants with high strength (at least 3). However, Rustbolt and The Smash have reliable access to other forms of removal anyway. Electric Boogaloo and Immorticia can also target it with Evaporate or Squirrel Herder (being a nut plant). For this reason, it is never a good idea to play Mirror-Nut alone, as it will be an easy target for instant-kills.

Do not let Mirror-Nut stay for long, as it will cause you serious damage if there are many nuts on the field. Damaging cards, especially mass-damaging ones like The Chickening and Fireworks Zombie, should never be played against such a setup as you will take 2 damage per nut hurt.

Using instant-kill cards is the only surefire way of confronting this plant without risking losing tons of health, as they will not activate Mirror-Nut's ability. Weed Spray is the most effective option against a Mirror-Nut setup because most nuts' strength are lower than 2, and there will be many nuts on the field at once. If the nuts are

Untrickable, zombies with instant-kill abilities like Squirrel Herder are your only options.

Bouncing Mirror-Nut is only a temporary solution; but it is still a good solution nonetheless. However, make sure you have brains left over to deal with the remaining nuts before Mirror-Nut can be played again.

If you are playing as a Sneaky hero, you can have Zombot Sharktronic Sub or

Deadly zombies to remove the nuts once they take damage. And as Impfinity, mass-damaging cards such as Gas Giant and Barrel of Deadbeards can be used in tandem with Zombot Sharktronic Sub to destroy all the nuts at once. This strategy may result in you taking serious damage, but destroying the nuts at once is at least better than letting them stay on the field.

If you are playing as Professor Brainstorm, you must quickly take down either your opponent or Mirror-Nut since his classes are ineffective against nut decks.

Retrieved from "https://plantsvszombies.fandom.com/wiki/Mirror-Nut?oldid=2370451"
Community content is available under CC-BY-SA unless otherwise noted.