To buy and level up Power Mints
Mints are items in Plants vs. Zombies 2 which are used for buying Power Mints and their seed packets. Mints are primarily obtained through the Arena, and are earned through win streak rewards and rank rewards. Completing certain quests in the Travel Log can also give the player mints. Mints are hard to get, because they come in small amounts for beginner players, and the difficulty of the arena is increased as the player climbs up the rankings. Mints cannot be bought with real money, unlike gems, coins, and gauntlets, so skill is required for the player to earn them.

Methods of obtaining them

Note: The power mints cost 100 mints each, their pinatas cost 25 mints each:

Mints can be fairly hard to obtain in large amounts. However, if one keeps playing every day when a Power Mint is available, they can get up to 62 mints from Arena win quests from the Travel Log alone. In addition, mints can be obtained from the reward streak. Try and play an average of 5 matches per day, then you can quickly obtain mints from the reward streak to earn mints. The Power Mint showcase quests will help too, as you can obtain 5 - one twentieth of your total.

Keeping a steady rank of 4th or 5th will help give you many mints without you promoting to higher leagues and facing harder players, which would otherwise increase the difficulty of obtaining mints.

Receiving one mint after completing a Win a Arena Match quest

An advertisement of Super Streak Week 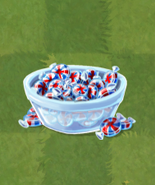 3D version of mints
Add a photo to this gallery

Retrieved from "https://plantsvszombies.fandom.com/wiki/Mint?oldid=2352225"
Community content is available under CC-BY-SA unless otherwise noted.