Not to be confused with Miner Threat

Flies
Miner Problem is a zombie in Plants vs. Zombies: Battle for Neighborville. They only appear in Mount Steep, where they are trying to fill the mine with cheese.

The final boss of the area, Major Problem, is created from a group of Miner Problems falling into the cheese.

Miner Problems can naturally spawn in certain parts of Mount Steep. They also commonly appear in the quests of this area.

In Parmageddon!, the player and Dandelion discover they have been destroying the pipelines at the Cheese Pumping Station and plan to fill the mine with cheese.

In Treasure Hunt, a group of Miner Problems steal and rip up Exposition Al's map before they can give it to the player and they must be hunted down. These Miner Problems have more health than a normal Miner Problem, must be unearthed from their hiding place beforehand, and are invincible until their Robo-Zombie companions are defeated.

When the player reaches Rock Bottom, a single Miner Problem attempts to attack, before being shot down into the cheese, where several follow down with them and become the boss of the area.

Miner Problems have relatively low health, so most plant classes should be able to take them down easily. However, avoid the close-ranged classes (Chomper and Snapdragon) as you'll never get close enough to the Miner Problem to deal enough damage as them. Rose's homing can be helpful, as it will allow her to hit the Miner Problems even if they move. Cactus can charge up her attacks to kill them in one shot. 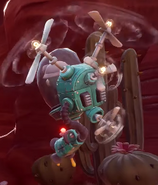 Back view of a Miner Problem 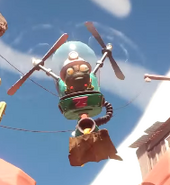