I need my TIME MACHINE!
Mine is a conjectural name for this article.
If you know the official name or have a better name or
translation for it, please contact a wiki administrator to change it.

The Mine was a location in Plants vs. Zombies Online. At this location, the player could send off one of their decks of plants to harvest coins that could later be obtained through the Treasury building. Sending the plants off would take an amount of time to get to the nearby mining location, but it could be boosted up with Acceleration Cards. After the plants were arrived, the harvest began.

The player could select one of three areas to be in, and the higher one would contain houses of higher-ranked players, and would give more rewards. Special figures would reward the player with rewards daily in Daily Benefits. The player could move their house and their mining locations with Mine Relocation Cards. 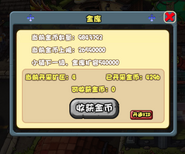 The menu where the player obtain the coins in Treasury
Add a photo to this gallery
Retrieved from "https://plantsvszombies.fandom.com/wiki/Mine?oldid=2250986"
Community content is available under CC-BY-SA unless otherwise noted.