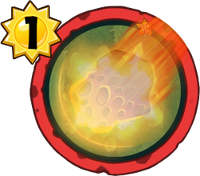 Do 3 damage to a Zombie.
You would think this would be especially effective against Zombies riding dinosaurs...

Meteor Strike is a super-rare plant superpower trick card in Plants vs. Zombies Heroes and a member of the

to play, and its ability does 3 damage to a selected zombie fighter. Its zombie counterpart is Electrobolt.

It is based on a meteor, also known as a shooting star, which is the visible passage of a glowing meteoroid.

Its old description is a reference to one of the main theories on why dinosaurs became extinct, namely meteor strikes.

Its new description makes a reference to Dino-Roar zombies and how Meteor Strike does not do extra damage to them.

You would think this would be especially effective against Zombies riding dinosaurs...

It is a cheaper version of Berry Blast as it does the same damage, but it can only be used on a zombie fighter and is not in the berry tribe. So if you have no intentions on using Berry Blast on your opponent, Meteor Strike is generally a better option, if available. It can also be played on turn 1 unlike Berry Blast, making it more effective against zombies like Tennis Champ, Mini-Ninja, or Arm Wrestler. However, it is better to use Banana Bomb against those zombies if you have it, since this trick should be saved for zombies with higher health.

Treat this trick like you do with Berry Blast, but with the fact that it cannot attack you and that it does not activate Sergeant Strongberry or Strawberrian's abilities. Use shielded zombies to prevent your opponent from playing this or have many zombies at once to make your opponent choose the one that is worth destroying the most. 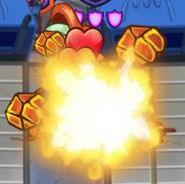 Meteor Strike about to be used on Paparazzi Zombie, note the lack of the border
Add a photo to this gallery 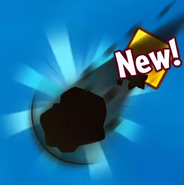 The player receiving Meteor Strike from a Premium Pack 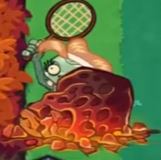 Retrieved from "https://plantsvszombies.fandom.com/wiki/Meteor_Strike?oldid=2259172"
Community content is available under CC-BY-SA unless otherwise noted.