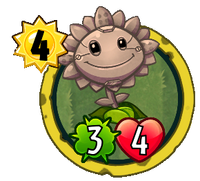 However, unlike Sunflower or Template:PvZH Link, it does not have the Team-Up trait, which makes it must fend for itself whereas the aforementioned two can hide behind another plant. Sunnier-Shroom could serve as an alternative to it, as he has decent health, can produce more sun, is cheaper, and has the Team-Up trait, although he loses out on flower synergy.

Retrieved from "https://plantsvszombies.fandom.com/wiki/Metal_Petal_Sunflower?oldid=1964629"
Community content is available under CC-BY-SA unless otherwise noted.