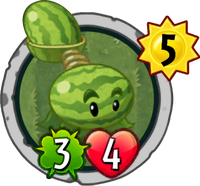 For other uses, see Melon-pult (disambiguation).

None
People who live in grass houses shouldn't throw stones. But melons, sure, why not?
Melon-Pult is a galactic rare plant card in Plants vs. Zombies Heroes and a member of the

. It has the Splash Damage 3 trait and does not have any abilities.

Its description references the proverb, "People who live in glass houses shouldn't throw stones," only with the word "glass" replaced by "grass."

People who live in grass houses shouldn't throw stones. But melons, sure, why not?

Think of this as a Snapdragon with a greater cost and health, but also the lack of the flower tribe. This means Melon-Pult cannot synergize with Briar Rose or Power Flower, but it is more likely able to attack more than once without getting destroyed in the process. Its base strength of 3 also prevents it from being destroyed by Weed Spray, Rocket Science, and Rolling Stone as well.

It is best played between three zombies with 3 health or less, so it can destroy all three of them. Also, it is recommended to

Freeze attacking zombies to keep it around longer.

Also, as with any other Splash Damage plant, this works great in Venus Flytraplanet because it can heal you up to 3 times.

It is not recommended to increase this plant's strength, as it does not affect its Splash Damage, and makes it susceptible to Rocket Science.

It is recommended to destroy this before it can attack. You can play instant-kill tricks like Locust Swarm and Knockout to get rid of it as well. Cakesplosion and Final Mission can also easily take it out if its health is not boosted, although Final Mission requires you to destroy a zombie. If you have no choice but to deal with it in combat,

An important thing to note is that lowering Melon-Pult's strength will not change its Splash Damage value unless its strength is lowered to zero. 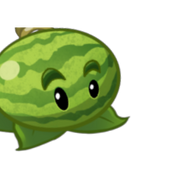 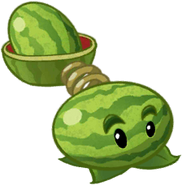 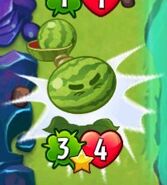 Slammin' Smackdown being played on Melon-Pult

Extinction Event being played on Melon-Pult 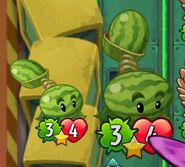 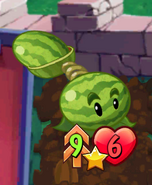 Double Strike trait
Add a photo to this gallery

Retrieved from "https://plantsvszombies.fandom.com/wiki/Melon-Pult_(PvZH)?oldid=2267703"
Community content is available under CC-BY-SA unless otherwise noted.