Melon-Pult loves giving back to the community. If he's not on the lawn, he's probably volunteering at the soup kitchen, making his hard-to-swallow melon noodle soup.

Lobs high-damage melons at random zombies on the lawn, with each causing splash damage on nearby zombies.

Melon-Pult is a Common Air-Guard Heavy Hitter Shrapnel plant in Plants vs. Zombies 3. It lobs watermelons at zombies that deal heavy splash damage. It is unlocked with Sawgrass after beating Floor 23 of the Devour Tower, and its seed packets are more likely to be dropped in BBQ Beach breakout battles.

It costs 10 sun, and it attacks zombies by lobbing melons down the lane it is planted in. These melons will also deal heavy splash damage to any nearby zombies in a 3x3 area.

Its Tacobility is based on the plant of the same name.

Melon-Pult's Plant Food is called Melon Mortar, in which Melon-Pult will lob heavy damaging melons at random zombies on the lawn.

Melon-Pult's Tacobility is Winter Melon, making Melon-Pult lob icy melons that slow zombies that it hits, as well as any zombies hit by splash damage.

Melon-Pult is a lobbing plant which deals heavy damage. It is very useful for taking out Flying zombies. Planting 2-3 of them per lane will be effective even late game. Its Tacobilty can be used on 1 per lane or if you don't have that many tacos use it on the middle lane or per 1-2 lanes.

On the other hand, Melon-Pult is a poor choice against Jetpack Zombie due to it being a

Chilling damage type, which is weak against Jetpack Zombie's

Electric type. It is better to use Flak Seed or another Air-Guard plant against this zombie. 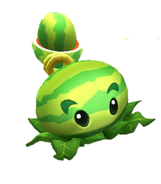 Melon-Pult In Spanish
Add a photo to this gallery
Retrieved from "https://plantsvszombies.fandom.com/wiki/Melon-Pult_(PvZ3)?oldid=2357792"
Community content is available under CC-BY-SA unless otherwise noted.