When you play a Zombie here, you get +2

this turn.
Zombies often find brains in space. It's usually the space between your ears.
Medulla Nebula is a galactic uncommon zombie environment card in Plants vs. Zombies Heroes and a member of the

to play, and its ability gives the zombie hero +2

Its name is a combination of "medulla" (a short term for "medulla oblongata"), the lower half of the brainstem that is on top of the spinal cord, and "nebula," an interstellar cloud of dust, hydrogen, helium, and other ionized gases.

Its old description is an allusion to the zombies' love for brains in the Plants vs Zombies series.

Zombies often find brains in space. It's usually the space between your ears.

(including Brain Vendor since he is essentially a free zombie) in it. But in most cases, you will be refunded 2 brains per turn, allowing you to spend more brains on other things.

And while that is good enough, you can increase the number of brains you end up with even more using Flag Zombie: Flag Zombie makes other zombies cheaper, meaning that you will end up with 1 more brain per zombie played in Medulla Nebula, and even 2

zombies will give you a surplus. However, only Rustbolt can do this normally.

Even better, playing Brain Vendor on that environment will reward you a profit of 2

, which will allow you to have 6

on turn 4 (which can increase to 7

if Flag Zombie or Terror-Former 10,000 is played beforehand). allowing you to play powerful cards like Bad Moon Rising that turn. Rustbolt can play Gargologist on the next turn to play a powerful Gargantuar such as Defensive End, or even play Triplication for free if another Gargologist is on the field, rather than using just Brain Vendor to create a one-time effect, forcing his opponent to decide whether to take down the Gargantuar and leave Gargologist alive, or to destroy Gargologist and take an attack from the Gargantuar. Take note that it does require 2 cards in order to perform this combo, so it is a good idea to have good card draw or bring multiple copies of Brain Vendor and Medulla Nebula.

Professor Brainstorm can use cards like Final Mission, Fireworks Zombie, and other similar cards to clear the lanes, letting you use the environment's ability again. He can also use Mystery Egg to earn a profit of +3

This environment can allow your opponent to get a refund of brains, or even earn extra brains with the help of Flag Zombie or Brain Vendor, so remove this environment if you can. Try to play any of your environments in that same environment to remove it easily. You can also play Whipvine or Banana Peel to move a weak zombie into this environment, then leave it alone or play a high-health plant with no strength in front of it to clog Medulla Nebula for good. However, watch out for zombie-Bouncing and Evolution cards.

If you are a

Smarty hero and your opponent is saving their brains for the Zombie Tricks phase, Brainana is the perfect counter, preventing your opponent from playing any cards that turn. 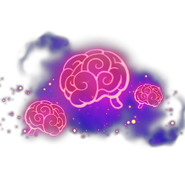 Three Medulla Nebulas on the field

Medulla Nebula being the featured card on the menu for the August 20th, 2017 Daily Challenge