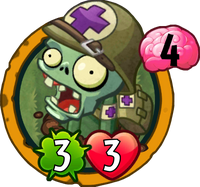 When played: Heal 4.
It's hard keeping Zombies on their feet. It's harder keeping feet on the Zombies.
Medic is a basic common zombie card in Plants vs. Zombies Heroes and a member of the

. They do not have any traits, and their ability heals a selected zombie or the zombie hero for up to 4

when they are played. Their closest plant counterpart is 2nd-Best Taco of All Time.

They are based on a medic, an umbrella term for a person who works in medicine, which includes physicians, paramedics, medical students, military medical corpsmen and medically-trained individuals participating in the role of a medic.

It's hard keeping Zombies on their feet. It's harder keeping feet on the Zombies.

Medic is one of the more potent basic cards in the game, as their ability can potentially turn the tide of the game in your favor. They can be used to heal you, while also being a decent defense to the lane they are played on. They can also be used to heal up other zombies so that they're able to last longer. Neptuna has the best usage out of Medic, as she can reuse their ability with In-Crypted, Firefighter, or Mixed-Up Gravedigger. Firefighter is also a pretty strong card in itself, making them more of a threat than the other two. The Smash can use Secret Agent on Medic to not only activate their ability again, but make them a more serious threat, as they will return with 6

Medic should not be too difficult to destroy, as they have low stats, on top of being vulnerable to Chomper, Berry Blast, and Whack-a-Zombie. Their ability is the more important part about them. However, it can't be countered directly, and can prove to be a nuisance. Also, note that their ability can be used on, not only your opponent but, their zombies too. Do not Bounce them, as your opponent will be able to play them again, thus healing themselves or a zombie again.

Retrieved from "https://plantsvszombies.fandom.com/wiki/Medic?oldid=2283087"
Community content is available under CC-BY-SA unless otherwise noted.