The game starts with the second and fourth lanes having a Garlic in the fifth column from your house and four Sunflowers to its left, although occasionally, there can be a single Peashooter, Torchwood, or Squash. A Pole Vaulting Zombie can rid the place of all the Sunflowers easily. Attack these rows first. The large amount of sun will later help to plant a Gargantuar. Never send a Zombie or a Buckethead Zombie to these lanes, as they will bite the Garlic and move to other lanes. You can send them if there is a Squash just behind the Garlic.

The first, third, and fifth lanes have a huge arsenal of offensive plants that can often even kill a Buckethead with ease. This is when Gargantuar is to be used. Plant him on such rows and he will smash his way through (explaining the level's name). If a Squash is in the fifth column from the left, it will hit the Gargantuar, causing him to throw his Imp, which in such cases may eat the brains even before the Gargantuar is done clearing the row. Occasionally, there will be two Kernel-pults and one Squash in a lane. Rarely, two Squashes can appear on the same lane, causing a Gargantuar to die. If the Squash is at the start of the lane, this could kill your Gargantuar because of the constant buttering, but the Imp may be able to eat the lane's placed brain when thrown.

Gameplay of the level

Gargantuars smash brains instead of eating them

This is a very rare occurrence; two lanes that consist of Sunflowers and Garlics only 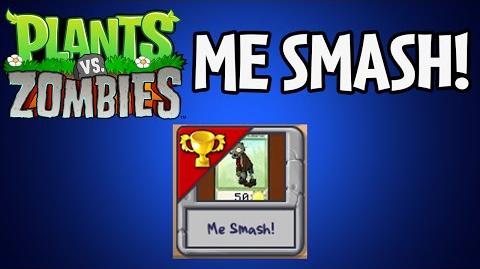 Plants vs. Zombies - Me Smash! PUZZLE MODE
By Drek'TharSuperSword 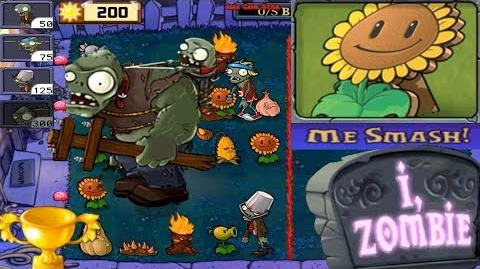 Plants vs. Zombies (PC) - Puzzle - Me Smash! Gameplay Playthrough
Add a photo to this gallery
Retrieved from "https://plantsvszombies.fandom.com/wiki/Me_Smash!?oldid=2168443"
Community content is available under CC-BY-SA unless otherwise noted.