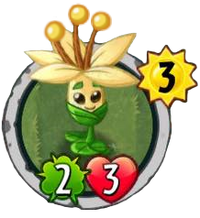 When this hurts the Zombie Hero, Conjure a Corn, Squash or Bean.
Do April showers bring Mayflowers? My goodness, isn't that a personal question!

Mayflower is an event plant card in Plants vs. Zombies Heroes and a member of the

. It has the Amphibious trait, and its ability Conjures a random corn, squash, or bean card every time it hurts the zombie hero.

It was introduced during the 2016 Fall Food Fight event alongside Turkey Rider, and was available from November 14th to November 22nd. As of January 24th, 2017, both of them were made craftable.

It had a special pack which included it, along with Twin Sunflower and Sow Magic Beans. The pack cost 400 gems.

It is based on the plant in real life with the same name (Epigaea repens), a low, spreading shrub in the family Ericaceae.

It is also partially based on the Mayflower, the first English Separatists transporting ship to North America that sailed in 1620, which is a reference to its availability during Thanksgiving and its Amphibious trait.

Its ability is a reference that corns, squashes and beans – collectively known as the Three Sisters – were both the main crops of Indigenous North Americans and popular Thanksgiving produce.

Its description is a reference to the proverb "March winds and April showers bring forth May flowers."

Do April showers bring Mayflowers? My goodness, isn't that a personal question!

Mayflower is slightly similar to Cattail with reversed stats, but the ability makes it shine. However, this only works if the Mayflower hurts the zombie hero, so it is ideal to play it in an aquatic lane unless an Amphibious zombie blocks the path. Use plant tricks that damage, destroy, or Bounce zombies so that Mayflower can hit the zombie hero. Most likely, if Mayflower hurts the zombie hero, there is a high chance that you would earn a bean since there are more beans than squash or corn. Try to keep allowing Mayflower to hit the zombie hero to have a chance at one of the possible legendary cards, however, it also has a very high chance of giving you bean cards which could be used to boost a bean-based deck such as Admiral Navy Bean. Take note as you may get cards that may not work out with your deck or get weak ones like Sting Bean and Weenie Beanie.

While Rose can use this in a flower deck, this can become somewhat detrimental as while Mayflower itself can still benefit from Power Flower and Briar Rose, the cards it gives you are generally not suitable for a flower deck. Speaking of Briar Rose, it is a good plant to keep your opponent from easily destroying Mayflower, and can be useful to discourage your opponent from playing big Amphibious threats like Deep Sea Gargantuar to confront Mayflower. Rose is also able to play instant-kill cards such as the aforementioned Briar Rose and Squash to remove zombies fronting Mayflower.

A good synergy when playing as Green Shadow is to use Espresso Fiesta or Plant Food on it, as its bonus attacks can hit the zombie hero, and give you more cards in your hand. Captain Cucumber can be used with Mayflower to reduce the cost of all cards Mayflower conjures. Also, using Plant Food on it makes it immune to most instant-kill cards. Be wary of Cakesplosion, Final Mission, and Knockout, though.

As Nightcap, if it is blocked by a zombie, you can use damaging tricks such as Berry Blast or Cherry Bomb.

Citron and Beta-Carrotina might have trouble using it well, but they can use tough Team-Up plants such as Wall-Nut and Water Chestnut to protect it or Force Field to shield it. Citron can also play Root Wall and Peel Shield.

Pairing this up with Dino-Roar cards such as Bananasaurus Rex is also a good idea, as they will activate their abilities if Mayflower hurts your opponent.

Below here is a list of cards that can be Conjured by Mayflower (by cost order):

However, be careful if Quickdraw Con Man is on the field, as if Mayflower Conjures a card, you will take 1 unblockable damage.

Because of its low stats, it should not be too difficult to destroy. However, if it is played on an aquatic lane, it can be very difficult to get to it, especially if the player is playing as Rustbolt, Z-Mech, or Professor Brainstorm, who all lack Amphibious zombies.

If the player happens to play as a hero or use a deck with no access to aquatic lanes, the best option is to play tricks like Rolling Stone, Weed Spray, or Zombot's Wrath. If it gets boosted, Rocket Science, Cut Down to Size, Locust Swarm, or Zombot Sharktronic Sub are good options as well.

Hearty heroes, despite not having any Amphibious zombies, are good at combating Mayflower, due to the usage of cards such as Terrify, Sumo Wrestler, Rolling Stone, Landscaper, Celestial Custodian, and Planetary Gladiator, which takes damage for the hero. Terrify and Sumo Wrestler can move Mayflower out of the aquatic lane, Rolling Stone and Celestial Custodian can destroy it due to its low strength, Landscaper can decrease its strength when revealed to 0, making it a waste of space unless boosted, moved, or Bounced, and Planetary Gladiator negates Mayflower's ability. If the player is playing as Rustbolt, Shrink Ray can be played to make sure Mayflower cannot attack, turning it to a lane waster, assuming it doesn't get boosted by tricks like Fertilize or Plant Food.

Having Quickdraw Con Man on the field can also deter it's usage.

Retrieved from "https://plantsvszombies.fandom.com/wiki/Mayflower?oldid=2229267"
Community content is available under CC-BY-SA unless otherwise noted.