Attack enemies in front of them. The more they attack the more fiery they become, can even ignite peas after set alight.

Lights itself alight after attacking for awhile, can also be lit on fire by other plants, can light peas on fire after being lit on fire

Torchwood always tries to tell everyone Match Flower is his descendant, but not only can Match Flower light peas, he's also a warrior that has a "let the fists do the talking" attitude, being obviously much stronger than Torchwood, who can only make a scary face to scare enemies.

Match Flower (火柴花拳手; pinyin: huǒchái huā quánshǒu) is a plant in the Chinese version of Plants vs. Zombies 2 introduced in the 1.8.2 update. He attacks zombies by punching them one tile in front of him. After dealing a certain amount of damage (c.a. four attack cycles), he will set his petals on fire and start to do more damage. He can also be set on fire by other plants. When he is on fire, he can light up peas that pass through him, just like Torchwood. However, the flames have limited duration.

Match Flower's designs is based on the matchstick banksia (Banksia cuneata), also known as the Quairading banksia, an endangered species of flowering plant in the family Proteaceae.

His name is a mix of "match box," a box used to hold matches; "flower box," a potting device to hold flowers; and "boxer," an athlete from the sport of boxing. His ability is a reference to how matches ignite when they are struck against a suitable substance.

His costume, a pair of red boxing gloves, is a reference to how he attacks zombies, and another reference to the boxing motif with the plant.

When fed Plant Food, Match Flower will spit out fireballs in a 3x3 area around him and his petals will be set on fire.

His Plant Food effect is now one second longer.

In Frostbite Caves, Match Flower can be used as a mixture of Bonk Choy and Torchwood who deals more damage than a regular Bonk Choy, if you want to use him outside of Frostbite Caves, make sure you have him to at least level 3 or 4, you can also try to team him up with Firebloom Queen if he is not yet at level 2. 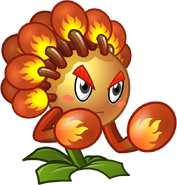 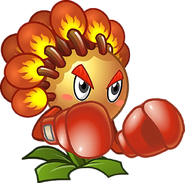 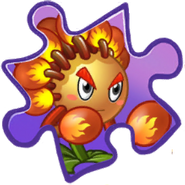 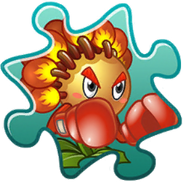 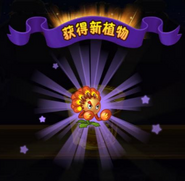 Obtaining Match Flower from a chest 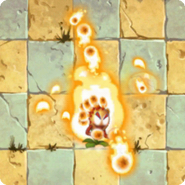 Match Flower on the title screen (note he has a costume)

Match Flower on instructions on how to unlock Firebloom Queen

Match Flower in an event banner

Match Flower on a Gold Tile 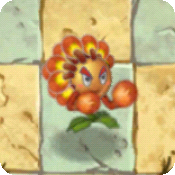 Match Flower with his petals on fire