Uses its cane nunchucks to attack zombies in front of it.

Mastercane is also a hot fan of Bruce Lee, and to show his respect, he starts practicing Sugarcane-wondo, and can use cane nunchucks very well. Imitating Bruce Lee is his favorite thing to do, so now he only speak "Adah, adah!"

Mastercane (蔗师父; pinyin: zhe shīfu) is a plant from the Chinese version of Plants vs. Zombies 2. He was added in the 2.0 update.

Mastercane uses his nunchaku to attack zombies in two ranges in a range of 3 tiles in front of him,with each attack dealing 25 damage per shot. He repeats a cycle of 3 attacks with his nunchaku. After that, he will cool down for a while.

He is based on the genus Saccharum, commonly known as sugarcane.

His name comes from "sugarcane", the plant he's based on and "master" is how a martial art teacher is called in Chinese generally.

Its costume (a yellow suit) is a reference to Bruce Lee.

Mastercane sends out many circling sticks of nunchaku in 3 lanes (3 tiles down the lanes), and finishes with a wave down the center lane (3 tiles). He will also hit himself with his nunchaku and get dazed, which is only a effect in appearance.

All nunchaku attacks have an exploding effect, which can deal more damage.

This plant is quite an offensive one, but attacks slowly, so use slowing plants such as Primal Rafflesia to max out his damage potential. When leveled up, his knockback attack can be useful, but note that he does not work on mechanical enemies. Since he is melee, you want to protect him with something high-health like a Wall-nut. 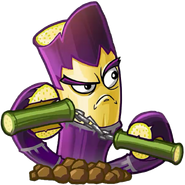 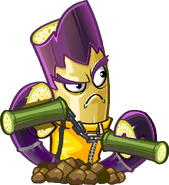 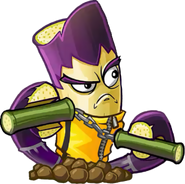 Mastercane after doing its final attack (Cooling down)

The slot where you can pay gems to potentially obtain Mastercane 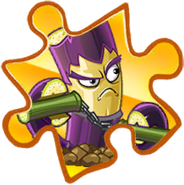 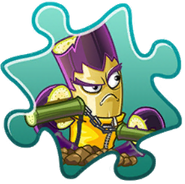 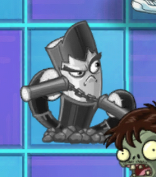 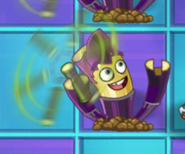 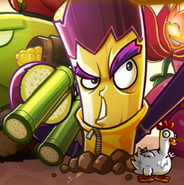 Mastercane get hits by its own nunchaku after Plant Food effect

Retrieved from "https://plantsvszombies.fandom.com/wiki/Mastercane?oldid=2369246"
Community content is available under CC-BY-SA unless otherwise noted.