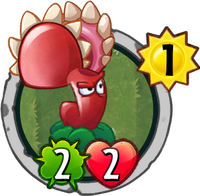 When this hurts the Zombie Hero, steal a section from their Super-Block Meter.
He loves Venus Flytrap, but sometimes they see things SO differently!

Mars Flytrap is a galactic uncommon plant card in Plants vs. Zombies Heroes and a member of the

He is based on the plant in Plants vs. Zombies Online with a similar appearance.

His name, color, and gender may also refer to the planet Mars, a red planet in the solar system whose symbol (♂) also represents males.

His description may be a reference to a popular book Men are from Mars, Women are from Venus, a book about relationship which uses the metaphor of the planets Mars and Venus as symbols of the stark difference between men and women.

He loves Venus Flytrap, but sometimes they see things SO differently!

Mars Flytrap is really useful turn 1 play, not only having decent stats, but also filling up your block meter, which increases your likelihood of a Super-Block against early threats like Mini-Ninja, while making it harder for your opponent to block your plants' attacks.

But since Mars Flytrap needs to hurt your opponent to steal their Block Meter sections, you will need a way to get around zombies blocking Mars Flytrap. Fortunately, all Smarty heroes have their own ways to make Mars Flytrap hit their opponent directly: Green Shadow has bonus attack cards and zombie-moving cards (the latter possibly giving more opportunities for Mars Flytrap to steal sections), Nightcap has damaging cards to remove zombies blocking him, Template:PvZHLink has instant-kills and Sun Strike, while Template:PvZHLink and Beta-Carrotina have plant-moving cards.

Take note that this ability does not activate if your opponent gets a Super-Block right away.

Also, Mars Flytrap can make you block unnecessary attacks, possibly leading you to use up all 3 Super-Blocks too quickly and being unable to block future attacks when needed. Fortunately, even if that happens, Mars Flytrap still drains your opponent's Super-Block Meter. But if your opponent has no blocks remaining, do not play this card unless absolutely needed, as it is largely useless, being only a 2

plant with no good tribes and its ability no longer functionable.

This plant can be very pesky if not prepared, as he can hurt you, make it harder for you to block, and make it easier for your opponent to block at the same time. If that is the case, try to play swarms of weak zombies to waste your opponent's Super-Blocks early so that they will not be able to block stronger attacks later on.

If you want to destroy this plant, Bungee Plumber, Rolling Stone, or Weed Spray can destroy him easily. 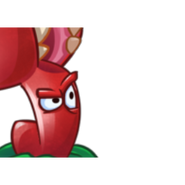 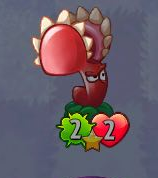 Mars Flytrap tinted gray due to a glitch

Time to Shine being played on Mars Flytrap

Retrieved from "https://plantsvszombies.fandom.com/wiki/Mars_Flytrap?oldid=2167294"
Community content is available under CC-BY-SA unless otherwise noted.