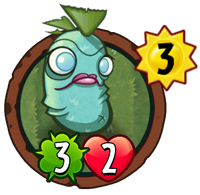 for each other Amphibious Plant.
Of course beans evolved gills. How else would they breathe underwater?

Marine Bean is a triassic super-rare plant card in Plants vs. Zombies Heroes and a member of the

. It has the Amphibious trait, and its ability gives it +1

for every other plant with the Amphibious trait on the field.

It is based on a bean, a common name for large seeds of several genera of the flowering plant family Fabaceae; and a fish, gill-bearing aquatic craniate animals that lack limbs with digits.

Its name is a combination of "marine," referring to its appearance and the Amphibious trait; and "bean," the real-life plant it is based on.

Of course beans evolved gills. How else would they breathe underwater?

Marine Bean's stats are a bit less than average, but it can possibly be a powerhouse in an Amphibious deck. Even having a few Amphibious plants alive gives it enough stats to power through a few turns. Water Chestnut is one of the best cards available, as its high health stat lets it live for several turns until you are ready to play Marine Bean.

Smarty class are too good to pass up, particularly good examples are Pear Pal and Laser Cattail, who also have the Team-Up trait, Navy Bean, who can boost your swarm of Amphibious plants so that they can stay alive until you play another Marine Bean, and Template:PvZHLink, who allows powerful non-Amphibious plants to count towards its ability. Despite having bean synergy, however, Marine Bean isn't the best choice in a bean deck; while it does synergize normally with Bean Counter and Navy Bean, the fact that most beans are non-Amphibious is the detrimental part.

Marine Bean can wreak havoc if there are enough Amphibious plants on the field, so it is best to get rid of Amphibious plants before it can be played, with the added benefit of eliminating them before they cause too much trouble themselves. Since most Amphibious plants have low stats, you probably won't need something too powerful to remove them.

As for Marine Bean itself, it will be vulnerable to Rocket Science if it gets even +1

. Damaging tricks should be able to weaken it if it didn't get a big boost in health. 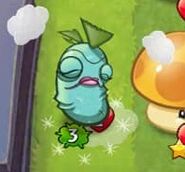 Marine Bean on the field 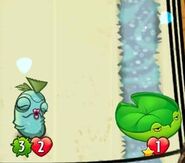 Nibble being played on Marine Bean

Marine Bean being the featured card in the menu for the April 27th, 2019 Template:PvZHLink
Add a photo to this gallery

Marine Bean shielded
Add a photo to this gallery

Retrieved from "https://plantsvszombies.fandom.com/wiki/Marine_Bean?oldid=2159000"
Community content is available under CC-BY-SA unless otherwise noted.