For other uses, see Marigold (disambiguation).

Stun
Marigold is a boss plant in Plants vs. Zombies: Garden Warfare 2 and Plants vs. Zombies: Battle for Neighborville. She is considered the plant version of the Treasure Yeti. She will sometimes spawn in Graveyard Ops in an objective wave, where the zombies have to find and defeat her in order to earn coins, coin bags and diamonds, as well as appearing rarely in the Backyard Battleground.

If she appears in Graveyard Ops, she will summon large hordes of Dandelion Weeds to attack her assailants, while in Backyard Battleground, the area the Marigold currently is in will experience a noticeable increase in Weed spawning (any Weed except for the Dandelion Weed).

Her first appearance in the Backyard Battleground is in the mission "Ancient Knowledge", where the player has to find and interact with The Scroll of Instruction for the Zen Sensei. After interacting with the scroll, the chest that it lays on is revealed to be a hiding Marigold, which the player must then vanquish to retrieve the scroll. She also makes a minor appearance in another mission for Ol' Deadbeard, where two Marigolds hide in breakable barrels. They will rarely appear in the backyard, depending on the circumstances. However, after a period of time, if they have not been vanquished and are still being chased, they will disappear, forcing the player to end their hunt.

She resembles a normal Marigold, except that she seems to be made entirely out of valuables. Her body and "arms" are made out of solid gold, while her petals are made of diamonds and her face is a large gem made of gold. She appears to be growing out of a treasure chest located at her base, inside which she hides when not being chased.

This boss is fast and disruptive. It is recommended to stay away from Marigold because she can use Chest Slam that can stun you, much like the Treasure Yeti's freeze attack. Using a sniper like Captain Deadbeard, Foot Soldier, Paleontologist, or Astronaut is suggested. However, this means that you will have to pick up all of the coins later on. Alternatively, it is possible to stay just outside the range of the Chest Slam while attacking. Although getting the distance correct takes some practice, maintaining this range is much more profitable than sniping, as your shots have a higher chance of hitting the fast Marigold and you can follow after her more closely and pick up all the dropped loot as you follow after her.

Keep in mind that despite her similarities in function to the Treasure Yeti, she is much smaller than the Yeti and is therefore harder to hit.

Try camping near the zombie base (in both Town Center and Weirding Woods) as the Strange Well is located near it and the Marigold will also spawn nearby, which will save you a lot of effort once you pick the Crystal Dog up. After vanquishing it, clear the area of plants quickly before picking up the Crystal Dog, as it will vanish if it's left for too long. Finally, head to the Strange Well carefully while trying to not get yourself vanquished by plants (if any of them are present), as you will become extremely vulnerable against attacks; even a hit from a Wildflower's projectile or a Weeds's slap can reduce your health by 10 or more points, and if you get vanquished, the Crystal Dog will also disappear, requiring you to start over.

Marigold in her treasure chest

Marigold from the right side 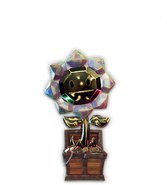 Marigold's BfN Boss Icon.
Add a photo to this gallery

Retrieved from "https://plantsvszombies.fandom.com/wiki/Marigold_(Boss)?oldid=2351912"
Community content is available under CC-BY-SA unless otherwise noted.