For other uses, see Marigold (PvZ).

After beating Level 5-7
Marigold spends a lot of time deciding whether to spit out a silver coin or a gold one. She thinks about it, weighs the angles. She does solid research and keeps up with current publications. That's how winners stay ahead.

0 (unusable on the lawn)

Unlocking the Zen Garden
Marigold has dedicated herself to the Zen lifestyle. She's a team player, and gives it her best there in the garden. But if she never has to confront another zombie on the lawn again it will be too soon.

Marigold is based on and named after the real-life plant of the same name, a genus of about 15–20 species of annual and perennial herbaceous plants in the daisy family Asteraceae. They are native to southwestern Asia, western Europe and the Mediterranean.

The fact that she produces gold coins might be a pun on her name, which contains the word "gold" as a part of it ("Marigold").

She is the first plant the player receives for their Zen Garden (they start out with two Marigolds). In the Zen Garden, she can appear in many different colors and is the least expensive plant.

Marigold returns in this game, but only appears in the Zen Garden and cannot be planted in-game. Unlike in Plants vs. Zombies, she does not have many different colored variants. The player starts out with the first Marigold as a tutorial.

When it grows to full size (hmin) it will spew out 500 coins in the form of 5 large gold coins. These each give $100, like small gold ones. The large shape is just cosmetic. After giving coins, the Marigold disappears.

Marigolds give you silver and gold coins.

Marigold spends a lot of time deciding whether to spit out a silver coin or a gold one. She thinks about it, weighs the angles. She does solid research and keeps up with current publications. That's how winners stay ahead.


Marigolds give you coin rewards in Zen Garden.

Marigold has dedicated herself to the Zen lifestyle. She's a team player, and gives it her best there in the garden. But if she never has to confront another zombie on the lawn again it will be too soon.

Planting Marigold costs 50 sun. Every 24 seconds or so she produces either a silver coin ($10) or a gold coin ($50), with gold coins being rarer than silver coins.

Marigolds are best used in conjunction with Gold Magnets, as the player will probably be too busy tending to their other plants to collect the money themselves.

The only purpose of the Marigold is to give the player money. Outside of this, Marigolds are nearly pointless, due to the slow recharge and no attacking powers. Using this plant at higher levels is not recommended (especially Fog and Roof levels) as they take up space that would be used for more useful plants. However, Marigolds are great space fillers in early levels (when playing Adventure Mode again), due to the lack of stronger zombies and potential for hoarding excess sun. In later levels, Marigolds take up too many valuable slots to be worthwhile (especially on the Roof).

Another strategy is to plant an entire row of Marigolds with a Gold Magnet and one or two Garlic or Imitater Garlic plants in the front to divert the zombies away. This method does not work on levels with Gargantuars, Catapult Zombies, and Zombonis because they do not eat plants.

Marigolds are commonly used in the mini-game Last Stand for gold farming.

Giant Marigolds give two silver coins or gold coins to you each time.

Giant Marigolds are bigger versions of Marigolds. They can be planted in the canceled mini-game Big Time, in place of regular Marigolds. It gives out one more coin than the normal Marigold. 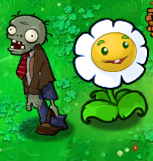 A giant Marigold is next to a Zombie

Giant Marigold seed packet
Add a photo to this gallery

As with all Zen Garden plants, Marigolds can drop gold and silver coins periodically for the player if they are happy. More Marigolds may be bought at Crazy Dave's Twiddydinkies for $2500, which restocks with three Marigolds every day; there is no limit to purchases in the Nintendo DS version, and for some versions changing the system time will restock the shop. To prevent easy gold farming, Marigolds sell for $3000, which is $5000 less than regular plants' selling price, and give fewer coins and diamonds on reaching each stage of growth. Unlike other plants in the Zen Garden, Marigolds start out as a small flower, while all other plants begin as identical sprouts. A fully grown Marigold can be sold to Crazy Dave for a net profit of $1500. It remains to give you coins by watering it.