Hops over the first path placed plant it runs into.

10 minutes
Mall Cop Zombie was a zombie in Plants vs. Zombies Adventures. He was introduced in Grey Matter Gardens Level 1. He hopped over the first path placed plant he runs into, unless he had already lost his segway. It takes two instant kills to defeat him.

One of the best options is to slow down the Mall Cop Zombie, so that he will be easier to take down. Otherwise, using a Wall-nut to block him will suffice as the segway gets instantly destroyed after vaulting over the Wall-nut. He will, however, continue to move inwards and eat plants that are behind the Wall-nut. It also takes two instant kills to kill him. Take caution when fighting the Mall Cop Zombies, as they are extremely dangerous, because he can easily overwhelm one's defenses when coming in large numbers.

Mall Cop Zombie without his segway

A Mall Cop Zombie without his helmet or segway 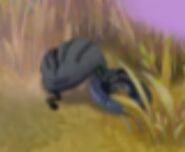