Magician Zombie vanishes zombies and himself forward on the board, and he's got sneaky doves who'll try to fly off with your plants.

Thymed Events - Backyard Big Top - Level 19
He's such an evil magician that he'll reveal all his secrets for a shiny nickel.

Not to be confused with Abracadaver.

Magician Zombie is a zombie in Plants vs. Zombies 2 encountered in the Backyard Big Top Thymed Events. He can teleport zombies and himself with his wand and summon doves with his top hat.

Magician Zombie vanishes zombies and himself forward on the board, and he's got sneaky doves who'll try to fly off with your plants.

He's such an evil magician that he'll reveal all his secrets for a shiny nickel.

He is immune to Enchant-mint-family plants', Thyme Warp's, and Spore-shroom's abilities.

His teleportation ability cannot be used on the following zombies:

By himself, he is an extremely minor threat, as he can easily be taken out before summoning Zombie Doves or teleporting zombies. However, his main strength shows when appearing in groups. His primary ability, teleporting zombies, can put some pressure into the player as the teleported zombie can destroy your plants or walk in an empty lane and trigger a lawn mower. If he teleports a defensive zombie, their massive health can give the Magician more opportunities to summon his Zombie Doves or teleport more zombies. Best case scenario is to kill the Magician as quickly as possible before he can teleport zombies. If this cannot be prevented, then placing Pumpkins on top of your plants can be done to avoid as many eaten plants as possible. Knocking the teleported zombies back will also work, as doing it can make the Magician vulnerable to any impending attack.

Magician Zombie's doves, while frailer than Zombie Parrots, can be summoned in up to groups of seven, allowing Magician Zombie to potentially take out more than one plant in one fell swoop. If the doves perch on top of your plants, immediately place a Blover, Hurrikale, or Boingsetta to kill them instantly.

Both of his abilities are at their deadliest when he appears in Save Our Seeds levels. His teleportation ability can allow stronger zombies to eat your endangered plants, and his doves can immediately cause a game over if not taken care of eventually. If the former happens, use Pumpkins or similar vines to protect your plants from the inside, knock them back with plants such as Chard Guard, or teleport them back with Hocus Crocus. If it's the latter, use Blover, Hurrikale, or Boingsetta to get rid of them.

Freezing the Magician immediately after appearing in the lawn works as an easy counter, as it leaves Magician Zombie helpless while your plants wittle down his health. 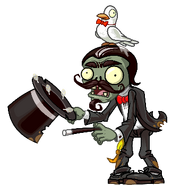 Magician Zombie and Zombie Dove from the Fan Art Kit 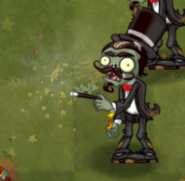 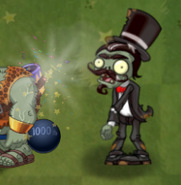 Ability without his arm 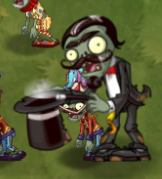 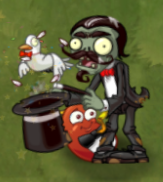 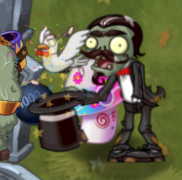