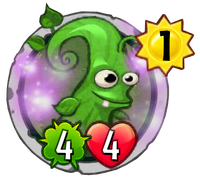 When played: Draw a card.
Giant not included.
Magic Beanstalk is a token plant card in Plants vs. Zombies Heroes and a member of the

Smarty class. It can be obtained as a card from Moonbean, Lima-Pleurodon, or Sow Magic Beans. It costs 1

. It does not have any traits, and its ability draws a card when it is played. Its closest zombie counterpart is Cell Phone Zombie.

Its name and appearance are based on the gigantic beanstalk in the popular English fairy tale, Jack and the Beanstalk.

Its description is a reference to the giant that owned the castle in the clouds that is reachable by climbing the beanstalk in said fairy tale.

Magic Beanstalk is a 1-sun plant with 4

and immediate card draw. The low cost comes with an extremely high value.  If obtained, there is absolutely no reason not to play it. However, all cards that can give you Magic Beanstalks shuffle them into your deck, so you cannot guarantee its usefulness in every match; typically, you will get to use them late in the game, so it is best not to make a strategy relying on them.

If you come across Magic Beanstalk early into the game, be extremely careful. Magic Beanstalk is a very dangerous card, and if too many appear early in the game it is a guaranteed loss. Even if it appears later in the game, it is still a good idea to keep an eye on it.

Since Magic Beanstalk has a good amount of health, you will need a glass cannon or a

Deadly zombie (including Barrel of Barrels) to safely deal with it. And for tricks, Final Mission and Rocket Science are cheap and effective counters. Quickdraw Con Man is also a deterrent, as most Smarty heroes lack effective healing and playing the Magic Beanstalk will instantly cause it to deal 1 unblockable damage (since he has Bullseye) to the plant hero, preventing them from spamming Magic Beanstalks. However, Quickdraw Con Man himself is not viable late-game.

Do not bounce this plant, because it can, and always will be played again easily, giving your opponent another card.

The best counter would be playing two Extinction Events, using a Supernova Gargantuar (boosting him is recommended), or a Zombot 1000. Those are the best counters avaliable to

Beastly Heroes if too many of them appear at once. If the situation is dire, a

Hearty hero can use Planetary Gladiator and a shielding card.

Retrieved from "https://plantsvszombies.fandom.com/wiki/Magic_Beanstalk?oldid=2340780"
Community content is available under CC-BY-SA unless otherwise noted.