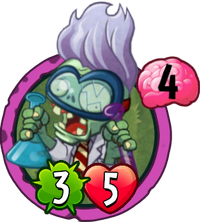 For the version in Plants vs. Zombies: Garden Warfare, see Chemist.

When you play your first Trick each turn, Conjure a Trick.
He's not so much "mad" as he is "mildly annoyed."
Mad Chemist is a premium super-rare zombie card in Plants vs. Zombies Heroes and a member of the

. He has the Gravestone trait, and his ability Conjures a random trick card when the first zombie trick is played every turn, starting from the turn he is revealed, unless the zombie hero has already 10 cards in their hand.

Having average stats for a 4

zombie, Mad Chemist is not mainly used for combat, but for his rather useful and interesting ability; while it is luck-based, you have a good chance of obtaining tricks outside of your classes, which you will be able to surprise your opponent with. Mad Chemist also goes well with any deck, as long as it has a fair number of tricks.

To make use of Mad Chemist's ability well, you must play at least one trick per turn. This means that you will have to spend brains to activate his ability; while it doesn't matter if you do need to play the trick for your strategy, it is beneficial to spend as few brains as possible in any other case. Therefore, it is recommended to bring many cheap tricks into your deck, or use Zombie Yeti, who provides you a cheap trick in the name of Yeti Lunchbox at the end of every turn (assuming they survive). However, the latter is exclusive to Immorticia. Thinking Cap is also a good pair with him, as while it isn't very cheap, it is a trick that Conjures two cheap tricks, which is enough for the next two turns (assuming the superpowers Conjured aren't Iron Boarder, Ice Moon, and Teleportation Station). If you are playing as Super Brainz, Huge-Gigantacus, or Rustbolt, you can use Dr. Spacetime or Zombology Teacher respectively to reduce the cost of tricks to result in more free brains.

Protecting Mad Chemist is also vital, as he is only able to Conjure one trick per turn; this means that he has to survive for a few turns to be worthwhile. While many cards can improve his survivability, tricks are the preferred option as you can activate his ability as well. Examples include Vitamin Z, Healthy Treat, Rock Wall, and Escape through Time.

Since he is part of the science tribe, you can synergize him with Zombot Drone Engineer to increase his base strength, Gadget Scientist to perform a bonus attack, and Interdimensional Zombie to activate his ability when this zombie is revealed. As of Gravestone synergy, Super Brainz and Huge-Gigantacus can give Mad Chemist a small boost with Headstone Carver, and as for Professor Brainstorm, he has access to Grave Robber, who will get a small boost when Mad Chemist is revealed.

Mad Chemist isn't much of a threat in terms of stats, but his Conjuring ability is what makes him one. While you could confront him with a plant to destroy him, he will still be able to destroy most of them unless they do a bonus attack. Instead, play instant-kill or damaging cards to destroy, or at least weaken him. Grave Buster and Whack-a-Zombie are perfect examples for instant-kills, while two Berry Blasts are your best bet in terms of damaging cards.

Since Mad Chemist's ability is based on tricks, anti-trick cards (Black-Eyed Pea, Sportacus, Forget-Me-Nuts, Dark Matter Dragonfruit, Brainana) should work well against him too, although they won't be able to deal with him directly (minus with direct combat). Also, try to get rid of any Dr. Spacetimes and Zombology Teachers on the field, because your opponent will be able to spend fewer brains on tricks, and thus, prepare their bigger threats more easily.