Spins microphone to damage nearby plants when he's dropping his sick, sick rhymes.

Destroys plants in a 3x3 area

Instantly kills plants in an area of 3x3

(microphone attack gets reduced to a 1x1 area when shrunken)

(takes 3 spins to fully destroy it)

(can knock him back, disabling his attack)

Neon Mixtape Tour - Day 10
MC Zom-B doesn't want you to know it, but his fancy bling is really just gold-plated zinc he got from his grandma.
MC Zom-B is the seventh zombie encountered in Neon Mixtape Tour in Plants vs. Zombies 2. When the rap jam plays, he will start rapping, and if he encounters a plant within a 3x3 range, he spins his microphone to kill all non-defensive plants in the 3x3 area around him. Each spin deals a total of 2005 damage to each plant.

MC Zom-B's name is an abbreviated form of Master of Ceremonies, a person who hosts an event or performance. In the late 1970s, the term MC or M.C. became an alternative title for rappers, referencing their dedication to hip-hop music and culture.

MC Zom-B wears a blue and white cap placed sideways on his head. He wears a pair of large shades that are crooked with the right part bent slightly upwards. The zombie has a shaved brown beard and short brown hair. In his mouth, a microphone is being clenched by his teeth as the cord hangs down. He wears a blue jogger outfit with the top quarter white and white lines from the outside of each leg up to the waist. He is wearing a pair of white sneakers with a red stripe alongside. His left shoe is torn at the front, revealing his toes.

His gold chain necklace hangs around his collar down to his stomach with a large circular ring with a giant "Z" serving as the medallion. This bling is also just a smaller version of Wild West Gargantuars brand. He wears a thick gold ring on his left hand and a golden rectangle knuckleduster on his right hand.

When he is reacting to the rap jam, after spinning his microphone he will appear to have his microphone further lodged in his mouth. He will also look like he is sucking the object briefly.

Spins microphone to damage nearby plants when he's dropping his sick, sick rhymes.

MC Zom-B doesn't want you to know it, but his fancy bling is really just gold-plated zinc he got from his grandma.

Despite being weak in terms of health, his ability to instantly kill non-defensive plants during the rap jam makes this zombie become very problematic. Since he reacts instantly when a plant approaches or is planted in his damage area, the player must kill him as fast as they can. Furthermore, he can be assisted in getting further into your defenses by Breakdancer Zombie, whose ability to kick zombies forward also activates during the rap jam.

In Modern Day, MC Zom-B can cause problems in the player's defense, as portals will allow for him to close the distance between himself and the plants to allow for a quick and devastating attack. What's even worse is that Breakdancer Zombies also spawn with MC Zom-B allowing the latter to get even further towards defenses.

MC Zom-B in the Neon Mixtape Tour Side A trailer 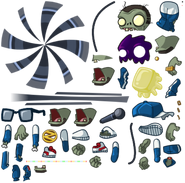 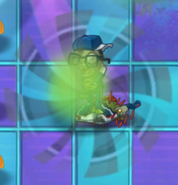 MC Zom-B trying to remove the sap from Sap-fling. However, this was fixed in the 4.1 version of the game.

Concept art of MC Zom-B, along with other Neon Mixtape Tour zombies 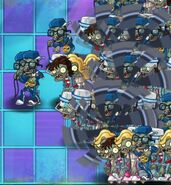 A horde of MC Zom-Bs 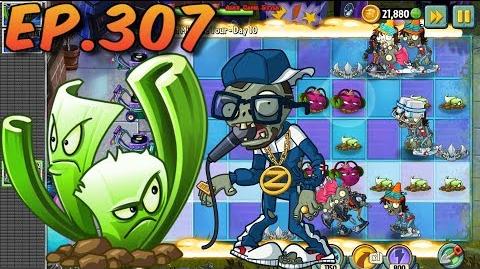