For the version in Plants vs. Zombies: All Stars, see MC Glory (PvZ: AS).

Attacks zombies in front of it with powerful shock waves.

Reflects zombies' sound projectiles, after it levels up, DJ Morning Glories will combine their power to increase their attack.

MC Glory has been disturbed by the noise of the renovation upstairs for a long time. After he asked his neighbor, DJ Beet on how to solve the problem, he immediately bought a MSR-7 headphone.

MC Glory (喇叭花; pinyin: lǎbāhuā; sometimes officially called DJ喇叭花) is a plant from the Chinese version of Plants vs. Zombies 2. He was added in the 1.9 update and he is an event plant which the player can earn by either buying a plant pack or enter a lottery event. He costs 375 sun and attacks zombies by firing high damaging sound waves at them which do 200 damage per shot.

MC Glory is based on the morning glory, one of many plants in the Convolvulaceae family; and a disc jockey (or DJ for short).

When given Plant Food, MC Glory produces a large shock wave which pushes back zombies in 3 tiles in front of him and continuously damages zombies which are in front of the shock wave, as well as stunning them until the effect ends.

His shock wave is now three lanes wide instead of one.

As he can deflect soundwaves back from Hair Metal Gargantuar, Bass Zombie and Zombot Multi-stage Masher at any time, he should be placed in front of them because he can protect the plants from being destroyed by soundwaves. However, he has a high sun cost which requires the player to manage their sun well enough to plant him. 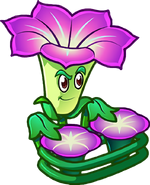 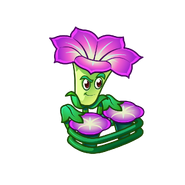 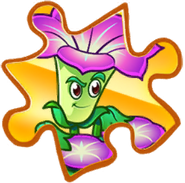 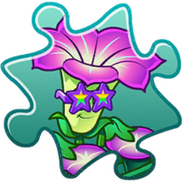 Deflecting the soundwave to a Hair Metal Gargantuar 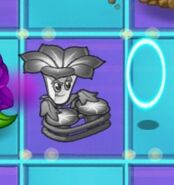 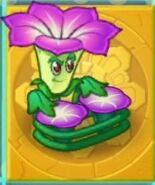 MC Glory on a Gold Tile 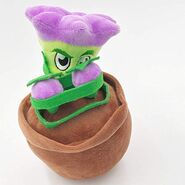 MC Glory Plush
Add a photo to this gallery

Retrieved from "https://plantsvszombies.fandom.com/wiki/MC_Glory?oldid=2367494"
Community content is available under CC-BY-SA unless otherwise noted.