Start a Wiki
watch 27:53
Plants vs. Zombies Garden Warfare 2 Lunar Landing Splitscreen Live From PopCap
Do you like this video?

Lunar Landing is a map in Plants vs. Zombies: Garden Warfare 2. Not to be confused with Moon Base Z, this map takes place on the Moon and it was first revealed in the Z7-Mech trailer. Half of the map is a large Moon surface with low gravity and the other half is inside a lunar base with regular gravity.

A secret staging area where Dr. Zomboss plans to dominate every planet in the solar system. It even has space golf!

This map has a unique gimmick, in which the outside portions of the map have low gravity. Classes with high speed and maneuverability will benefit from this mechanic. Classes with low jumps can also benefit from this as well. The map is also filled with many obstacles and objects, which can be used for cover. Chomper is at a disadvantage for this map due to the gravity. Zombies can easily dodge Chomper's Burrow by jumping, and the lengthened jump makes this more effective. Additionally, there is a section of the map that is wide open and does not maintain the gravity mechanic. In this area, there is almost no room to hide due to the long corridors and open main area, so have full health when venturing into this area. 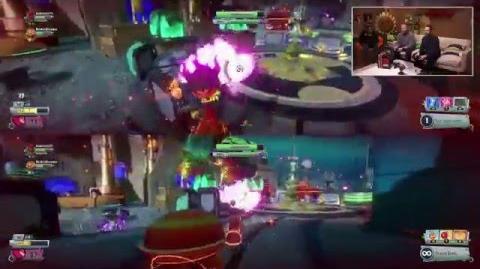 Zomboss' face in the sky, outlined.
Add a photo to this gallery

Retrieved from "https://plantsvszombies.fandom.com/wiki/Lunar_Landing?oldid=2250968"
Community content is available under CC-BY-SA unless otherwise noted.