Her name might be a reference to hallucination, a perception in the absence of external stimulus that has qualities of real perception, referring to her ability to disorient the player's vision and controls with her Hypno Leech ability. In this case, "Lucy" is a corruption of the word "hallucination."

Because of her ability to constantly turn invincible, defeating her can be a pain and if you're not careful, you might even fail the Battle Zone. Unlike other Battle Leaders, don't try to vanquish other enemies too frequently, as lowering her health is already quite difficult. Use characters that are able to deal a lot of damage in a short period of time such as the Foot Soldier with the Rapid Fire upgrade, the All-Star, or Super Brainz, and attack her as soon as she exits the invincibility mode. You can also use an ability such as the ZPG or Super Ultra Ball, but you need to time it correctly, or else you might hit her while she becomes invincible again. 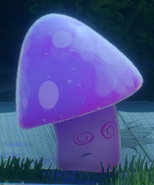